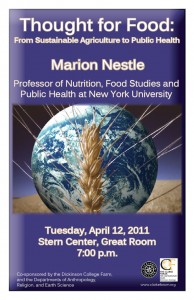 Topical Background (provided by the speaker)
Many of the problems in our current food system can be traced back to changes in agricultural policies in the 1970s. Soon after, changes in the U.S. food environment—agricultural as well as corporate–promoted a culture in which it became socially acceptable to consume more calories than expended. The resulting “epidemic” of obesity threatens the health and security of Americans, strains the health care system, and creates a substantial economic burden on society. Underlying these changes is an overabundant and overly competitive food system in which companies are required to expand market channels in order to meet corporate growth targets. The contradiction between public health goals and corporate goals has led to a large and growing food movement in the United States aimed at changing the system in order to promote healthier and more environmentally sound food choices by individuals. Such changes aim at creating a sustainable food system that is healthier for farm animals, communities, the environment, and climate change. This presentation considers the social, cultural, economic, and institutional factors that influence agricultural policies and food choice, and the balance between individual and social responsibility for those choices. 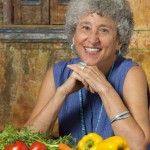 Marion Nestle is the Paulette Goddard Professor in the Department of Nutrition, Food Studies, and Public Health at New York University, which she chaired from 1988-2003. She is also a professor of sociology at NYU and visiting professor of nutritional sciences at Cornell. She earned a Ph.D. in molecular biology and an M.P.H. in public health nutrition from University of California, Berkeley. Previous faculty positions were at Brandeis University and the UCSF School of Medicine. From 1986-88, she was senior nutrition policy advisor in the Department of Health and Human Services and editor of The Surgeon General’s Report on Nutrition and Health. Her research examines scientific and socioeconomic influences on food choice, obesity, and food safety, emphasizing the role of food marketing. She is the author of Food Politics: How the Food Industry Influences Nutrition and Health (revised edition, 2007), Safe Food: The Politics of Food Safety (revised edition 2010), What to Eat (2006), Pet Food Politics: The Chihuahua in the Coal Mine (2008), and Feed Your Pet Right (with Malden Nesheim). She is currently working on a book about Calories for University of California Press. She writes the Food Matters column for the San Francisco Chronicle, and blogs daily (almost) at www.foodpolitics.com and for the Atlantic Food Channel, and twitters @marionnestle.