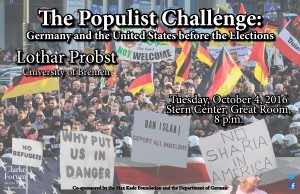 The Populist Challenge: Germany and the United States before the Elections

In the run-up to this year’s elections, both the U.S. and Germany are confronted with the phenomenon of a populism that employs anti-establishment and anti-Muslim prejudices in order to maximize votes. This lecture will focus on the similarities and key differences between contemporary populism in Germany and the United States. 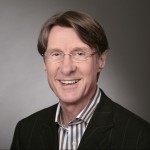 Lothar Probst is a German political scientist who recently retired from a professorship at the University of Bremen. At Bremen University he was the managing director of the Institute for Intercultural and International Studies and chair of the Department of Research in Elections, Political Parties and Participation at the Institute of Political Science. His central research and teaching interest lies in the area of party and election research. Beyond that he works on theories of democracy, political culture research and the development of new social movements and citizens’ movements. Probst continues to be a sought-after commentator in the German political scene.