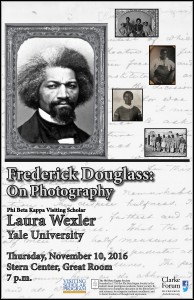 In the 1860s, Frederick Douglass gave several public lectures about the importance of the then-new invention of photography.  In “Pictures and Progress” he shared his vision of the role he hoped photography would play in fostering a more democratic society after the Civil War.  Along with Sojourner Truth, Douglass thus became one of the first major American theorists of the medium.  This lecture engages with his critical thought in the context of his time, and ours.

The event is sponsored by the  Clarke Forum for Contemporary Issues and Phi Beta Kappa. 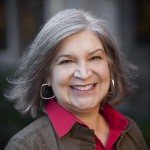 Laura Wexler, co-director of the Yale Public Humanities Program, is professor of American studies, professor of film & media studies, and professor of women’s, gender & sexuality studies at Yale University, and she holds an affiliate position in ethnicity, race & migration.  She is also founder and director of the Photographic Memory Workshop at Yale.  She is former chair of the Women’s, Gender & Sexuality Studies Program, and former co-chair of the Yale Women Faculty Forum.

Professor Wexler has received numerous fellowships and awards, including a Henry R. Luce Foundation Grant for a three-year long project on “Women, Religion and Globalization,” (2007-2010) and institutional financial support to help pilot the Public Voices Thought Leadership Fellowship Program of the OpEd Project at and beyond Yale.  Her positions as a scholarly consultant include the PBS Documentary Kate Chopin: A Re-Awakening, the Alice Austen House on Staten Island, and the Eugenic Rubicon Project.   She serves as a member of the advisory board of Bridging with STEAM/M, and is a partner on Family Camera, both recipients of major grants from the Social Sciences and Humanities Research Council of Canada.  From 2015-2016, she was an agent of the Hillman Photography Initiative at the Carnegie Museum of Art.  She serves on the editorial board of the Trans-Asia Photography Review, and is a member of the American Studies Association; C19: The Society of Nineteenth Century Americanists; The Organization of American Historians; The American Historical Association; The Modern Literature Association; The Center for the Study of Social Difference at Columbia University; and FemTechNet, an activated network of hundreds of scholars, students, and artists who work on, with, and at the borders of technology, science and feminism.

Since 2011, Professor Wexler has been principle investigator of the Photogrammar Project team, co-directed by Taylor B. Arnold and Lauren Tilton.  Photogrammar has received funding from the National Endowment for the Humanities and the American Council of Learned Societies to make a web-based interactive research system for mapping, searching and visualizing the more than 170, 000 photographs from 1935-1945 created by the Farm Security Administration and Office of War Information during the Great Depression and the first years of American entry into World War II.

Professor Wexler centers her scholarship and teaching on photography and visual culture. Her many essays and books include the award-winning Tender Violence: Domestic Visions in an Age of U.S. Imperialism (2000), Pregnant Pictures (2000), and “’A More Perfect Likeness:’ Frederick Douglass and the Image of the Nation,” in Pictures and Progress: Early Photography and the Making of African American Identity, Maurice Wallace and Shawn Michelle Smith, eds. 2012.   Two essays are forthcoming in 2017:  “The Purloined Image of Roland Barthes,” in Photography and the Optical Unconscious, Sharon Silwinski and Shawn Michelle Smith, eds., and “’I Saw It!’: The Photographic Witness of Barefoot Gen,” in Remaking Reality: U.S. Documentary Culture after 1945, Sara Blair, Joseph Entin and Franny Nudelman, eds.

Currently, she is teaching a graduate seminar in the digital humanities, developed with support from the Mellon Foundation, and a seminar on American public sculpture, developed in cooperation with the Smithsonian American Art Museum.  She is collaborating with Magnum photographers Donovan Wylie and Jim Goldberg on a book about New Haven.  As well, in 2015 the Whitney Humanities Center at Yale held the first public exhibition of her own photographs, entitled “The Tenderness of Men in Suburbs.”

Since 1956, the Phi Beta Kappa Society’s Visiting Scholar Program has been offering  undergraduates the opportunity to spend time with some of America’s most distinguished scholars. The purpose of the program is to contribute to the intellectual life of the institution by making possible an exchange of ideas between the Visiting Scholars and the resident faculty and students. The 15 men and women participating during 2016-2017 will visit 110 colleges and universities with chapters of Phi Beta Kappa, spending two days on each campus and taking full part in the academic life of the institution. They will meet informally with students and faculty members, participate in classroom discussions and seminars, and give a lecture open to the university/college community and the general public. Now in its 61st year, the Visiting Scholar Program has sent 648 Scholars on 5,288 two-day visits.

Founded in 1776, the Phi Beta Kappa Society is the nation’s most prestigious academic honor society. It has chapters at 286 colleges and universities and more than half a million members throughout the country. Its mission is to champion education in the liberal arts and sciences, to recognize academic excellence, and to foster freedom of thought and expression.

Additional information about the Visiting Scholar Program can be found on Phi Beta Kappa’s website (www.pbk.org/programs).