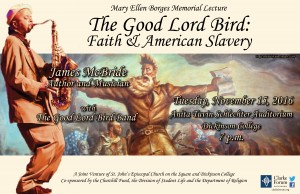 In this presentation, which is based on his National Book Award winning novel, The Good Lord Bird, McBride shares the story of John Brown, using gospel and spiritual music of the time to frame his life and how it is presented in the book. He will be accompanied by his band, The Good Lord Bird Band. A book sale will follow.

This event is a joint venture sponsored by St. John’s Episcopal Church on the Square and the Clarke Forum for Contemporary Issues and co-sponsored by the Churchill Fund, the Division of Student Life and the Department of Religion. 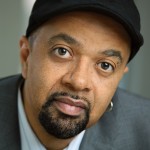 James McBride is a renaissance man and a born storyteller. He is the author of The Color of Water: A Black Man’s Tribute to His White Mother, a moving narrative about his mother, a white Jewish woman from Poland who married a black man, founded a Baptist church and put 12 children through college.

The Color of Water is an American classic, read in colleges and high schools nationwide. It has sold more than two million copies and spent two years on The New York Times Bestseller List. McBride’s second book, Miracle at St. Anna, is now a Touchstone/Disney film that he wrote the script for and was directed by American film icon Spike Lee. McBride co-wrote the film Red Hook Summer with Lee, which premiered at the Sundance Film Festival in 2012. A coming-of-age story about a young black boy, the film probes issues of race, neighborhood gentrification, impotent police, and the ravaging effects of drugs and gang violence on the African American community, to name a few.
His book, Song Yet Sung, is a national bestseller, the 2009 choice of “One Book/One Maryland” and is being adapted into a miniseries on FX. In his latest novel, The Good Lord Bird, McBride tells the story of a young boy born a slave who joins John Brown’s antislavery crusade—and who must pass as a girl to survive. The Good Lord Bird went on to win the National Book Award for Fiction in 2013, a prestigious honor amongst authors, and will be turned into a major motion picture starring Liev Schreiber and Jaden Smith.
McBride’s newest book, Kill ‘Em and Leave: Searching for the Real James Brown, is an authorized biography of James Brown, embarking on a search that leads from America’s South to England to New York. The book is due for release in March 2016, and uncovers the saga of Brown’s childhood, including a never-before-revealed story of Brown’s sharecropper family who were uprooted by America’s largest nuclear bomb-making facility.

A graduate of Oberlin College and the Columbia School of Journalism, McBride has written for The Boston Globe, People and The Washington Post. Also an award-winning composer and saxophonist, McBride has penned songs (music and lyrics) for Anita Baker, Grover Washington Jr. and Gary Burton, as well as for the PBS character “Barney.”
In his keynotes, McBride touches upon life’s rich lessons, exploring the nature of identity, race and heritage. He often appears with his own jazz ensemble, using music to inspire audiences and lift his colorful, often humorous stories to another level. He is an inspiring speaker, always delighted to meet students, non-judgmental, non-confrontational, speaking to the common good that unites us all. It is his mantra. “All of my work speaks to the commonality of the human experience,” he says. “That’s where I live, to move audiences to think, to question, and to find common ground.”