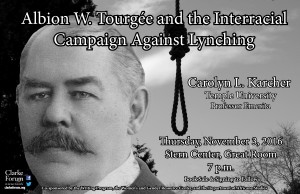 Albion W. Tourgée and the Interracial Campaign Against Lynching

This lecture focuses on Tourgée’s campaign against lynching, in which he teamed up with the African American journalist-activists Ida B. Wells and Harry C. Smith to form a united front against anti-Black violence. A book sale and signing will follow.

This event is sponsored by the Clarke Forum for Contemporary Issues and co-sponsored by the Writing Program, the Women’s and Gender Resource Center and the Department of Africana Studies. 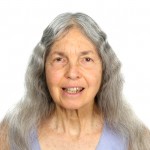 Carolyn L. Karcher is professor emerita of English, American studies, and women’s studies at Temple University, where she taught for twenty-one years and received the Great Teacher Award and the Lindback Award for Distinguished Teaching in 2002.  She is the author of Shadow over the Promised Land: Slavery, Race, and Violence in Melville’s America (1980); The First Woman in the Republic: A Cultural Biography of Lydia Maria Child (1994); and A Refugee from His Race: Albion W. Tourgée and His Fight against White Supremacy (2016).  She has also edited scholarly reprints of works by several 19th-century writers, including Tourgée’s novel about Black Reconstruction in North Carolina, Bricks Without Straw.