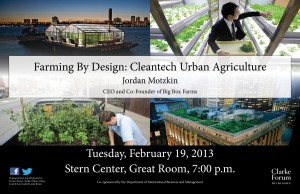 Big Box Farms is a disruptive, revolutionary hybrid that combines the benefits of small-scale farming and large-scale agribusiness. Motzkin, the company’s co-founder, will discuss entrepreneurship, technology, and the future of sustainable urban agriculture. 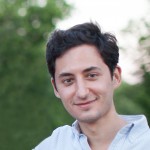 Jordan Motzkin is the co-founder and CEO of Big Box Farms, a NYC-based start-up. The company was started at the College of the Atlantic Sustainable Venture Incubator and seed funded through the National Science Foundation and US Department of Agriculture. Big Box Farms developed a breakthrough technology for the production of salad greens resulting in fresher, safer, and nutritious produce. The company’s technology centers on producing its crops inside industrial warehouses that are located near food distribution facilities, allowing the company to bring sustainable local agriculture to densely populated areas.

In 2010 he was awarded the first Sustainable Venture Innovation award from the College of the Atlantic for his work on Big Box Farms and was cited by the Rockefeller Philanthropy Advisors for his work with the Bar Harbor Chamber of Commerce in developing a campaign that resulted in the elimination of millions of pounds of CO2 emissions.

Jordan has lectured on the intersection of entrepreneurship, innovation, and sustainability at a variety of venues including Columbia University and the U.S. Japan Business Council. He has been interviewed and his work has been featured in Forbes, CNN Money, Mashable, CBS Television, Fox Business, and Net Impacts Principled Leader.