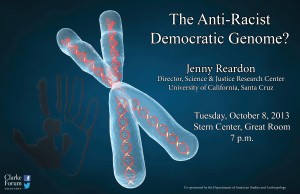 The opening decade of this millennium witnessed genome scientists, policy makers, critical race theorists and world leaders proclaiming the anti-racist democratic potential of human genomics.  These views stand in stark contrast to the 1990s concern that genomics might create new forms of racism.  This lecture explores this shift, both why it happened and what it reveals about emerging challenges for understanding issues of race and racism in the genomic age.

Jenny Reardon is an associate professor of sociology and faculty affiliate in the Center for Biomolecular Science and Engineering at the University of California, Santa Cruz.  She also founded and directs the UCSC Science and Justice Research Center.  Her book, Race to the Finish: Identity and Governance in an Age of Genomics, was published with Princeton University Press in 2005.  Reardon is internationally recognized for her groundbreaking work in race and genomics and science and justice, as well as her skills working across the natural and social sciences.  In all her work, she seeks to innovate spaces and languages capable of facilitating reflection and deliberation in an age increasingly mediated by emergent forms of technoscience.  Her writing has appeared in a diverse range of popular and academic venues, including Science, Nature, Current Anthropology, the Social Studies of Science, differences, and the San Francisco Chronicle.  She is currently at work on her second manuscript, The Post-Genomic Condition: Ethics, Justice, Knowledge After the Genome, a book she has been writing while on fellowship at the Brocher Foundation in Geneva, Switzerland.

One thought on “Jenny Reardon”