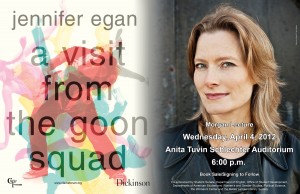 A Visit from the Goon Squad

Egan, Pulitzer Prize-winning novelist, will read from her work A Visit from the Goon Squad and discuss the novel, the characters and her writing process.

Biography (provided by the speaker)
Jennifer Egan is the author of the 2011 Pulitzer Prize-winning novel, A Visit from the Goon Squad. Published by Knopf in 2010, the book soared to the top of many publications’ Best of 2010 lists, including The New York Times, The Washington Post, Time, Slate, Salon, and People. In addition to being awarded the Pulitzer, A Visit from the Goon Squad won the National Book Critics Circle award for fiction, was nominated for the National Book Award for Fiction and for the Pen/Faulkner award, and was short listed for the Orange Prize for Fiction. In addition to her numerous awards, HBO selected Egan’s A Visit from the Goon Squad for a series treatment.

Egan is also the author of The Invisible Circus, a novel that became a feature film starting Cameron Diaz, Look at Me, a finalist for the National Book Award in fiction in 2001, Emerald City and Other Stories, and The Keep, which was a national best-seller. Her short stories have appeared in The New Yorker, Harper’s Magazine, Granta, McSweeney’s and other magazines. She is a recipient of a Guggenheim Fellowship, a National Endowment for the Arts Fellowship in Fiction, and a Dorothy and Lewis B. Cullman Fellowship at the New York Public Library. Her nonfiction articles appear frequently in The New York Times magazine. Her 2002 cover story on homeless children received the Carroll Kowal Journalism Award, and her most recent article, ”The Bipolar Kid,” received a 2009 Outstanding Media Award for Science and Health Reporting from the National Alliance on Mental Illness.