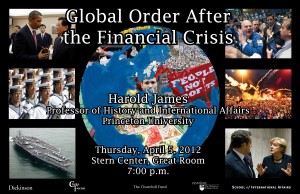 Global Order After the Financial Crisis

Today there exists a real possibility of deglobalization, not so much because of trade protectionism (that was a principal driving force of the last big episode of deglobalization in the 1920s and 1930s) but from the response to the character of the current crisis, which is primarily a financial one, and which will prompt a new financial nationalism that brings very different policy approaches to those of the past quarter century. In the 1990s, the most dynamic and richest states were generally small open economies: Singapore, Taiwan, Chile, New Zealand, and in Europe the former communist states of Central Europe, Ireland, Austria, and Switzerland. In the world after the financial crisis, the center of economic gravity will shift to really large agglomerations of power. Does this mean that the new world order will inevitably be a China-centered world?

This event is jointly sponsored by The Clarke Forum for Contemporary Issues, Penn State Dickinson School Law, the School of International Affairs and Betty R. ’58 and Dan Churchill. 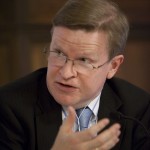 Biography (provided by the speaker)
Harold James is a professor of history and international affairs and the Claude and Lore Kelly Professor of European Studies at Princeton University. He was educated at Cambridge University. His books include The German Slump (1986); A German Identity 1770-1990 (1989) and International Monetary Cooperation Since Bretton Woods (1996). More recently he has written The End of Globalization: Lessons from the Great Depression (2001), and Europe Reborn: A History 1914-2000 (2003); The Roman Predicament: How the Rules of International Order Create the Politics of Empire (2006); Family Capitalism: Wendels, Haniels and Falcks (2006); and The Creation and Destruction of Value: The Globalization Cycle (2009). In 2004 he was awarded the Helmut Schmidt Prize for Economic History, and in 2005 the Ludwig Erhard Prize for writing about economics. He is also a visiting fellow at the European University Institute, and writes regularly for Project Syndicate.