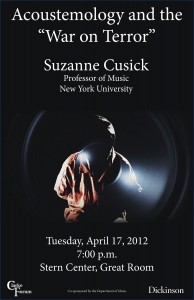 Acoustemology & the “War on Terror”

Based on interviews with released detainees at Guantanamo and elsewhere, this lecture analyzes the ways that regimes of sound and silence were used to attack the subjectivities of prisoners detained in U.S.-run prison facilities during the so-called “global war on terror.” More information.

The event is co-sponsored by The Clarke Forum for Contemporary Issues and the Department of Music.

Biography (provided by the speaker)
Suzanne G. Cusick is a professor of music at New York University. Her writing on music in relation to gender, sexuality and cultural history has appeared in such jo

urnals as the Journal of the American Musicological Society, Early Music, Musical Quarterly, Repercussions, Perspectives of New Music, Early Modern Women, TRANS, and the Journal of the Society for American Music. Her monograph “Francesca Caccini at the Medici Court” will be published by the University of Chicago Press in 2009. She is currently working on a book about the uses of sound and silence in U.S.-run detention camps in the so-called “global war on terror.”