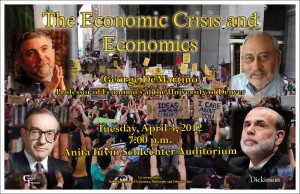 Professor of Economics at the Josef Korbel School of International Studies, University of Denver

The Economic Crisis and Economics

Since the outset of the economic crisis in 2008 Nobel Laureates Paul Krugman and Joseph Stiglitz and other economists have indicted the economics profession for its failure to predict the crisis. They argue rightly that the profession became overcommitted to economic models that prevented economists from worrying about the possibility of economic crisis. Indeed, leading economists continued to express confidence in the financial system even after warning signs were indicating that a crisis was imminent. But the critics have failed to appreciate the ethical obligations of the profession, and the way in which the profession’s historic refusal to engage its professional ethical responsibilities led economists to advocate policies that were far too dangerous, and that contributed to the crisis. The crisis in economics that has resulted from the economic crisis poses a new challenge and opportunity: to inaugurate the new field of professional economic ethics.

This event is sponsored by The Clarke Forum for Contemporary Issues and the Departments of Economics, Philosophy and Policy Studies.

Biography (provided by the speaker) George F. DeMartino is a professor of economics at the Josef Korbel School of International Studies, University of Denver. He is the co-d

irector of the MA Degree in Global Finance, Trade and Economic Integration. He has written extensively on economics and ethics, particularly in the context of international economic integration, and also on trade unionism and political economy theory. He is the author of Global Economy, Global Justice: Theoretical Objections and Policy Alternatives to Neoliberalism (Routledge, 2000) and more recently, The Economist’s Oath: On the Need for and Content of Professional Economic Ethics (Oxford University Press, 2011). At present he is co-editing with Deirdre McCloskey an Oxford University Press Handbook on Professional Economic Ethics.