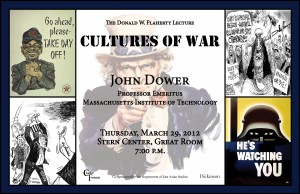 Emeritus Professor of History at the Massachusetts Institute of Technology

Historian John W. Dower draws on Cultures of War, his most recent book, to place 9/11 and the invasion of Iraq in a broader historical and comparative context that challenges the familiar canards of clash-of-civilizations thinking, and treats war-making as a congeries of cultures in and of itself. Drawing on his expertise in modern Japanese history and World War II in Asia, Professor Dower’s lecture will
focus on wars of choice, failures of intelligence and imagination, groupthink and wishful thinking, strategic imbecilities, and the deliberate targeting of civilians to destroy enemy morale that became standard operating procedure in the U.S. air war against Japan in 1945, culminating in the first “Ground Zeros” of Hiroshima and Nagasaki.

This event is co-sponsored by The Clarke Forum for Contemporary Issues and the Department of East Asian Studies, Penn State Dickinson School of Law and the School of International Affairs.

John W. Dower is an emeritus professor of history at the Massachusetts Institute of Technology and co-director of MIT’s innovative online “Visualizing Cultures” project, which uses the visual record of the past to open stunning new windows of perception on Japan and China in the modern world. Professor Dower’s best-known books include War Without Mercy: Race and Power in the Pacific War (1986) and Embracing Defeat: Japan in the Wake of World War II (1999). He has been honored with numerous book prizes, including the Pulitzer Prize, Bancroft Prize, National Book Award, and National Book Circle Critics Award, as well as Japanese awards for translations of his scholarly works. Professor Dower also was executive producer of the documentary film Hellfire-A Journey from Hiroshima, which was a finalist for an Academy Award in 1988.