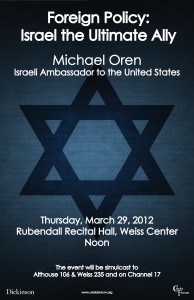 Israeli Ambassador to the United States

No backpacks or large bags will be allowed into Rubendall Recital Hall (RRH) and all small bags will be subject to search.  No cameras, video equipment, or signs will be permitted inside RRH.

This event is co-sponsored by The Clarke Forum for Contemporary Issues at Dickinson College, Scholars for Peace in the Middle East (SPME) – Central Pennsylvania Chapter, and the Jewish Federation of Greater Harrisburg-Pennsylvania.

Ambassador Oren’s Biography
A graduate of Princeton and Columbia, Dr. Oren has received fellowships from the U.S. Departments of State and Defense, and from the British and Canadian governments. Formerly, he was the Lady Davis Fellow of Hebrew University, a Moshe Dayan Fellow at Tel-Aviv University, and the Distinguished Fellow at the Shalem Center in Jerusalem. He has been a visiting professor at Harvard, Yale, and Georgetown.

Ambassador Oren has written extensively for The Wall Street Journal, The New York Times, and The New Republic, where he was a contributing editor. His two most recent books, Six Days of War: June 1967 and the Making of the Modern Middle East and Power, Faith, and Fantasy: America in the Middle East, 1776 to the Present, were both New York Times bestsellers. They won the Los Angeles Times’ History Book of the Year prize, a National Council of the Humanities Award, and the National Jewish Book Award.

Raised in New Jersey, where he was an activist in Zionist youth movements and a gold medal winning athlete in the Maccabiah Games, Ambassador Oren moved to Israel in the 1970s. He served as an officer in the Israel Defense Forces, in the paratroopers in the Lebanon War, a liaison with the U.S. Sixth Fleet during the Gulf War, and an IDF spokesman during the Second Lebanon War and the Gaza operation in January 2009. He acted as an Israeli Emissary to Jewish refuseniks in the Soviet Union, as an advisor to Israel’s delegation to the United Nations, and as the government’s director of Inter-Religious Affairs.

Ambassador Oren and his wife, Sally, have three children.