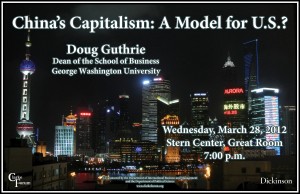 Dean of the School of Business, George Washington University

China’s Capitalism: A Model For U.S.?

One of the great ironies of our time is this: today, the largest Communist society in the world is also the world’s most dynamic and business-friendly capitalist economy. To examine this seemingly paradoxical circumstance, this lecture will analyze the economic reforms that have been sweeping across China for over three decades. As we view the changes in China through the prism of media representations, political rhetoric, and the many other distortions that have shaped perceptions of the reform process in China, the picture is murky at best. We will examine the changes that have actually occurred in China and the forces that have brought about this process of change. As it turns out, China’s course of building a market economy can teach the world’s capitalist powers a great deal about healthy market economies.

Biography (provided by the speaker)
Dr. Doug Guthrie is dean of the George Washington University School of Business and professor of International Business and Professor of Management. He is a recognized expert in the fields of economic reform in China, leadership and corporate governance, and corporate social responsibility.

Prior to joining GW, Dr. Guthrie served as professor of management at New York University’s Leonard N. Stern School of Business. He also held a joint appointment as professor of sociology on NYU’s Faculty of Arts and Sciences and was director of executive education at NYU-Stern from 2007-09.

Dr. Guthrie has held visiting positions at Harvard Business School, INSEAD and the graduate schools of business at Stanford University, Columbia University and Emory University. He served as director of the Business Institutions Initiative at the social Science Research Council (1999-2003) and was the academic director of the Berlin School of Creative Leadership from 2008-11.

He holds an A.B. in East Asian languages and civilizations with a concentration in Chinese literature from the University of Chicago. He earned his master’s and Ph.D. degrees in organizational sociology from the University of California, Berkeley. Fluent in Mandarin Chinese, Dr. Guthrie studied in Taipei, Taiwan, during his undergraduate years and conducted his doctoral research in Shanghai, China. Dr. Guthrie has authored, co-authored, and edited numerous books, articles, and reports on Chinese economic reform, leadership, and corporate social responsibility, including Dragon in a Three-Piece Suit: The Emergence of Capitalism in China (Princeton University Press); and China and Globalization: The Economic, Political, and Social Transformation of China (Routledge). His doctoral research was recognized with the American Sociological Association’s national award for the top dissertation in the field in 1997. He has also been the recipient of teaching awards, best paper awards, and grants from the Ford and Sloan Foundations.
Read more about Dr. Guthrie’s books at the following link:
http://business.gwu.edu/dean/publications/.