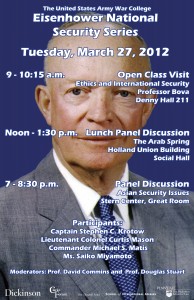 The Eisenhower program is an academic outreach designed to encourage dialogue on national security and other public policy issues between students at the U.S. Army War College and students/faculty at academic institutions. The fellows will be visiting classes and participating in events throughout the day.

Each year a few students at the U.S. Army War College participate in the Eisenhower National Security Series and travel outside Carlisle Barracks to engage in discussions with other students, academics, and the public about national security issues and the employment of military assets.

* This program is part of the Clarke Forum’s Leadership in an Age of Uncertainty Series and is co-sponsored by The Clarke Forum for Contemporary Issues, Penn State University Dickinson School of Law, School of International Affairs and the Churchill Fund.