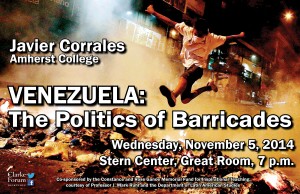 Venezuela: The Politics of Barricades

This event is sponsored by the Clarke Forum for Contemporary Issues and co-sponsored by the Constance and Rose Ganoe Memorial Fund for Inspirational Teaching, courtesy of Professor J. Mark Ruhl and by the Department of Latin American Studies.

Javier Corrales is professor of political science at Amherst College in Amherst, Massachusetts. He is currently working on the

second edition of his co-authored book with Michael Penfold, Dragon in the Tropics: Hugo Chávez and the Political Economy of Revolution in Venezuela (Brookings Institution Press, 2011).  In addition, he is working on a book project on constitutional assemblies and presidential powers in Latin America.   Corrales is also the co-author with Daniel Altschuler of The Promise of Participation: Experiments in Participatory Governance in Honduras and Guatemala (Palgrave Macmillan 2013), and with Carlos Romero of  U.S.-Venezuela Relations: Coping with Midlevel Security Threats (Routledge, 2013). He is the co-editor with Mario Pecheny of The Politics of Sexuality in Latin America (University of Pittsburgh Press 2010). He serves on the editorial board of Latin American Politics and Society and Americas Quarterly.