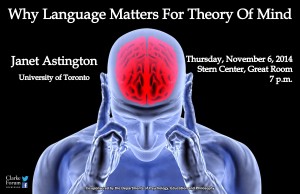 Why Language Matters for Theory of Mind

Astington will argue that language is critical in the development of theory of mind, which underlies human social interaction and self-awareness. 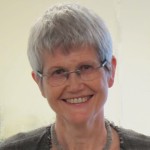 Astington played a central role in the development of the field of children’s theory of mind. She is author of The Child’s Discovery of the Mind (Harvard University Press, 1993), which has been translated into six different languages. She is editor or co-editor of four books, including Developing Theories of Mind (Cambridge University Press, 1988) and Why Language Matters for Theory of Mind (Oxford University Press, 2005). She has also published more than eighty book chapters and journal articles.

Astington was awarded the Delta Kappa Gamma Society International Educator’s Award (1994), the American Educational Research Association’s Raymond B. Cattell Early Career Award (1995), and a University of Toronto Connaught Research Fellowship (2001). She has held research grants from the Natural Sciences and Engineering Research Council of Canada continuously from 1988 to 2012. She has also received funding from the Spencer Foundation and the Social Sciences and Humanities Research Council of Canada.

Astington’s research is in children’s theory of mind. This is the understanding of people as mental beings, each with his or her own mental states– such as beliefs, desires, intentions, and emotions. Theory of mind underlies the ability to understand human behaviors by thinking about what is in a person’s mind. We explain our own actions, as well as attempt to interpret and predict other people’s actions, by taking account of mental states. Consequently, theory of mind concerns central aspects of development, involving cognition, language, and social interaction.

Astington’s approach is socio-cultural, with a particular focus on the role of language in theory-of-mind development. Astington’s applied interests are pedagogical, such as in helping teachers use theory-of-mind research to develop materials and approaches that engage children in mindful learning.