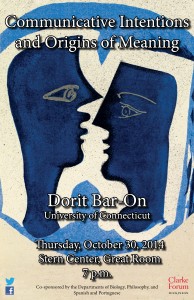 Communicative Intentions and Origins of Meaning

What separates human linguistic communication from all forms of nonhuman animal communication and how could it have evolved? I argue that focusing on the role of communicative intention renders the evolutionary emergence of language more puzzling than it needs to be. 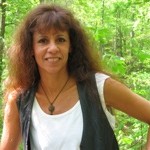 nd philosophy.  She continued to study philosophy at UCLA and wrote her dissertation on the Indeterminacy of Translation.  Bar-On has published extensively on topics in philosophy of language and mind, epistemology, and metaethics.  In 2004, she published a book titled Speaking My Mind: Expression and Self-Knowledge (Oxford Clarendon Press).  Work on that book led to her interest in studying continuities between human and non-human communication.

Bar-On is a recipient of a collaborative research NSF grant (2009-2013) for “Expression, Communication, and Origins of Meaning”.  In 2010-11, she was a fellow at the National Humanities Center.  She has recently been selected as a fellow at the Institute for Advanced Study, Berlin (Wiessenschaftskolleg zu Berlin) for 2015-16, where she will be working on a manuscript tentatively titled Expression, Action, and Meaning. She is currently a professor of philosophy at the University of Connecticut.

Campus-Only Viewing of the Lecture