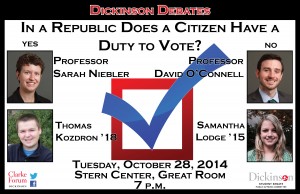 The 2014 elections will be held on November 4. Do American citizens have a duty to participate in this election? This debate will focus on whether there is such a duty from multiple perspectives.

This event is part of a new series titled Dickinson Debates sponsored by the Clarke Forum for Contemporary Issues and the Student Senate Public Affairs Committee. 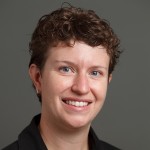 Sarah Niebler is an assistant professor of political science at Dickinson College. She studies campaigns and elections, political participation, and political communication and her work is published or forthcoming in the American Journal of Political Science, Political Communication, Legislative Studies Quarterly, and American Politics Research. Prior to coming to Dickinson, Sarah was a postdoctoral fellow in the Center for the Study of Democratic Institutions at Vanderbilt University. She earned her Ph.D. from the University of Wisconsin-Madison, but is a Pennsylvania native having grown up in Gettysburg and attended Muhlenberg College. 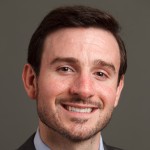 Thomas (Tommy) Kozdron is currently a first-year student at Dickinson College. He is interested in pursuing a course of study that includes pre-medicine as well as law & policy. On campus, he hopes to get involved with political life and civic engagement. He was born and raised in Pittsburgh, PA. 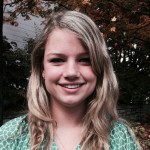 Samantha Lodge is Student Senate’s vice-president for Student Life and a senior political science and environmental studies double major, with a minor in economics. She is the music director for the Syrens, an active member of Pi Beta Phi, a member of the Political Science Majors Committee, and a TA for the Photo Department.

Dickinson Debates is a new series of debates co-sponsored by the Clarke Forum for Contemporary Issues and the Student Senate Public Affairs Committee.  In this series, Dickinson professors and students will debate significant and timely issues that are of interest to the Dickinson community.  If you have an issue that you think should be debated as part of this series, please email your idea to the Clarke Forum at clarke@dickinson.edu.