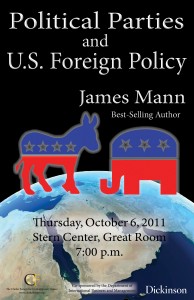 Description of Lecture
In election years, presidential candidates like to talk in stark terms about the differences between the Republicans and the Democrats. After a new president takes office, however, the differences sometimes don’t seem so profound as they were made to sound in the political campaign. So it has been with the Obama administration: there has been considerably more continuity from the George W. Bush administration to Obama’s than was expected during the 2008 election. There are, in fact, some longstanding differences between the two parties, but they are not always the ones the candidates of either party describe. And on some broad foreign-policy issues, both the Republicans and the Democrats have switched back and forth from decade to decade.

This event is co-sponsored by the Department of International Business and Management. 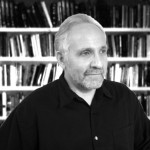 Biography (provided by the speaker)
James Mann is author-in-residence at Johns Hopkins School of Advanced International Studies. He was previously a Washington correspondent, columnist and Beijing bureau chief for the Los Angeles Times.

He has written five books: Beijing Jeep (Simon & Schuster, 1989), About Face: A History of America’s Curious Relationship With China (Knopf, 1999), the New York Times bestseller Rise of the Vulcans: The History of Bush’s War Cabinet (Viking, 2004), The China Fantasy (Viking, 2007) and The Rebellion of Ronald Reagan: A History of the End of the Cold War (Viking, 2009). He is now working on a new book on ideas about foreign policy in the Democratic Party, leading up to and including the Obama administration.

Mann’s newspaper reporting was awarded the Edward Weintal Prize in 1999 for distinguished coverage of foreign policy and two Edwin Hood awards for diplomatic reporting. The book About Face was awarded the Helen Bernstein Award for book of the year and the Asia-Pacific Award for best book about Asia. Rise of the Vulcans was a finalist for the Council of Foreign Relations’ Arthur Ross award for best book of the year.

He has been a contributor over the years to National Public Radio, the Atlantic Monthly, the New Republic and The Washington Post. Mann’s writing was included in the book The American Idea: The Best of the Atlantic Monthly, a collection of the magazine’s best articles from the past 150 years.