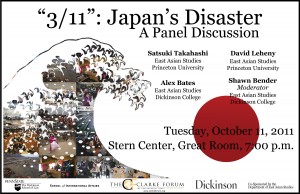 During the fall 2011 semester, the Clarke Forum will sponsor two panel discussions on Japan’s “3/11” that will examine the powerful Tohoku earthquake, the ensuing tsunami, and the ongoing nuclear situation. This panel will situate the current disaster historically and explore its social, cultural and political impact.

This event is jointly sponsored by The Clarke Forum for Contemporary Issues and Penn State University Dickinson School of Law and School of International Affairs and co-sponsored by the Department of East Asian Studies.

Satsuki Takahashi is a postdoctoral research associate at Princeton University. She received her Ph.D. in anthropology from Rutgers University in 2010, and has served for three years as a research fellow at the Institute of Social Science at the University of Tokyo. Based on her dissertation on fishing communities and on ongoing NSF RAPID-funded follow-up research, she is currently preparing a book manuscript on “unending modernization,” human-ocean relations, and discourses of survival in pre- and post-3/11 Japan.

David Leheny (Ph.D., Government, Cornell) is the Henry Wendt III ’55 Professor of East Asian Studies at Princeton University. Among his publications are Think Global, Fear Local: Sex, Violence, and Anxiety in Contemporary Japan and The Rules of Play: National Identity in the Shaping of Japanese Leisure, both published by Cornell University Press. He previously taught at the University of Wisconsin-Madison, was a research associate at the University of Tokyo, and served on the staff of the Office of the Coordinator for Counterterrorism at the U.S. Department of State.

Alex Bates  is an assistant professor at Dickinson specializing in modern Japanese literature and film. He graduated with his B.A. from Brigham Young University and has a Ph.D. from the University of Michigan.  He is currently completing a book manuscript focused on how authors and filmmakers represented a 1923 earthquake that destroyed Tokyo.  He was working on this project in Kyoto, Japan with a Fellowship from the Japan Foundation when the March 11th disaster struck. Though he was far from the destruction, representations of this more recent disaster in news and new media forms has provided fruitful opportunities for comparison.

Shawn Bender – Trained as a cultural anthropologist, Prof. Bender’s research currently focuses on the intersections among science, technology, and policy in contemporary Japan, particularly the development of robotics technologies for use by the aged and infirm.  He has also an abiding interest in Japanese music and performance, and is the author of a forthcoming book on taiko drumming groups in Japan entitled Taiko Boom. He teaches courses in East Asian studies on aspects of contemporary East Asian society and popular culture.  Bender received his B.A. from the University of Minnesota in 1992, his M.A.in 1996 and Ph.D. in 2003 from the  University of California at San Diego.