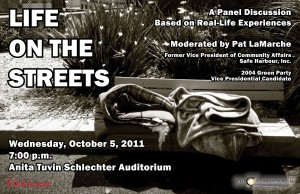 A panel of homeless and prior homeless individuals from Cumberland County will share their stories of how they fell through the social safety net and will answer questions on how they are recovering from their experiences.

There are more than a million homeless people in the United States living in shelters, on the street, in the woods, in storage units and doubled up with friends or relatives. Each story of homelessness is unique. While many folks suffer from addiction and mental health issues this is not the rule. In fact the average age of a homeless person (according to the National Coalition for the Homeless) is nine years old. Families with children is the fastest growing subset while veterans are the largest single subset.

This forum will allow for an opportunity to have candid discussions with individuals who have suffered from homelessness and to gain a better understanding of the issues that cause this condition.

Biography (provided by the moderator)
Moderator, Pat LaMarche, is the voice of The Pulse Morning Show. It broadcasts in Maine and is available on the web at zoneradio.com. This news and talk product launched by Author Stephen King pushes back against the conservative rhetoric found on most talk radio programs. Pat’s experiences working with the nation’s poor — most recently as vice president of Community Affairs at Safe Harbour, Inc., Cumberland County Pennsylvania’s largest homeless shelter — make her uniquely suited to answer the tough questions about how welfare, social services, inadequate education and societies other challenges effect the economy and the nation as well. As a former journalist and award winning broadcaster Pat spent two decades studying and reporting on poverty issues both in the U.S. and abroad. Pat took to the streets to uncover the lives of the homeless in what she called the “Left Out Tour” when she traveled the nation living in homeless shelters and on the streets. The book she wrote about those experiences is called, “Left Out in America; the State of Homelessness in the United States.”