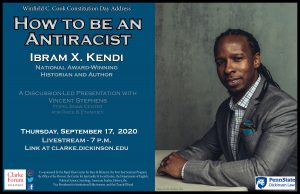 ** Members of the Dickinson community will be able to view the recording of this program on our website here:  Audio/Video tab, Lectures for Campus-Only

How to Be an Antiracist

When the first Black president headed into the White House, Americans were imagining their nation as colorblind and went so far as to call it post-racial. According to Kendi, since the 2016 election, people are awakening and seeing racial reality for the first time. With opened minds, people are actively trying to understand racism. In this lecture, Kendi will shift the discussion from how not to be racist, to how to be an antiracist. He will share his own racist ideas and how he overcame them. He will provide direction to people and institutions who want more than just band-aid programs, but actual antiracist action that will build an antiracist America. This discussion-led presentation will be moderated by Vincent Stephens, director of Dickinson’s Popel Shaw Center for Race & Ethnicity.

The program is sponsored by the Clarke Forum for Contemporary Issues and Penn State Dickinson Law and co-sponsored by the Popel Shaw Center for Race & Ethnicity, the Office of the Provost, the First Year Seminar Program, and Center for Spirituality & Social Justice, Vice President for Institutional Effectiveness , the Churchill Fund, and the departments of English, political science, history, sociology, and American studies. It is also part of the Clarke Forum’s Leadership in an Age of Uncertainty Series. 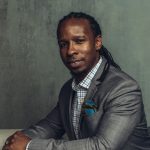 Ibram X. Kendi is a #1 New York Times bestselling author, the Andrew W. Mellon Professor in the Humanities at Boston University, and the founding director of the BU Center for Antiracist Research. Kendi is a contributing writer at The Atlantic and a CBS News correspondent. He is also the 2020-2021 Frances B. Cashin Fellow at the Radcliffe Institute for the Advanced Study at Harvard University.

Kendi is the author of Stamped from the Beginning: The Definitive History of Racist Ideas in America, which won the National Book Award for Nonfiction, and The Black Campus Movement, which won the W.E.B. Du Bois Book Prize. He is also the author of the #1 New York Times bestsellers, How to Be an Antiracist, and Stamped: Racism, Antiracism, and You, a young adult remix of Stamped from the Beginning, co-authored with Jason Reynolds. He most recently authored the #1 Indie bestseller, Antiracist Baby, available as a board book and picture book for caretakers and little ones.

Vincent L. Stephens (moderator) is the director of the Popel Shaw Center for Race & Ethnicity at Dickinson College. He completed his Ph.D. in American studies at the University of Maryland College Park in 2005 and has held teaching and administrative positions at various institutions. Stephens coordinates the Bias Education and Response Team (BERT) and serves on multiple College committees. He is also the 2020-21 president for the Pennsylvania chapter of the National Association for Multicultural Education (PA-NAME). An active scholar and teacher, he is the author of Rocking the Closet: How Little Richard, Johnnie Ray, Liberace, and Johnny Mathis Queered Pop Music (University of Illinois Press, 2019), co-editor, with Anthony Stewart, of Post Racial America? An Interdisciplinary Study (Bucknell University Press/Rowman & Littlefield, 2017) and a contributing faculty member in the Department of Music.