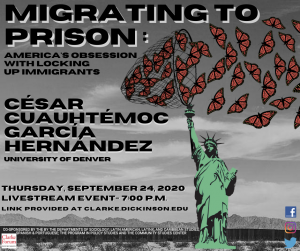 Migrating to Prison: America’s Obsession with Locking Up Immigrants

Every year, the United States imprisons almost half a million people because of immigration law violations. In Migrating to Prison: America’s Obsession with Locking Up Immigrants, García Hernández explains that we haven’t always done things this way and argues that we shouldn’t.

This event is sponsored by the Clarke Forum for Contemporary Issues and co-sponsored by the departments of sociology; Latin American, Latinx and Caribbean studies; Spanish & Portuguese; the Program in Policy Studies and the Community Studies Center. 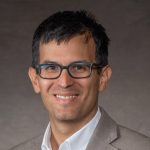 César Cuauhtémoc García Hernández is a writer and law professor at the University of Denver who focuses on migration policing. In December 2019, he published a book, Migrating to Prison: America’s Obsession with Locking Up Immigrants, about the United States’ reliance on prisons to enforce immigration law. In 2015, he published his first book, Crimmigration Law. His op-eds have appeared in The New York Times, The Guardian, Newsweek, Salon, and elsewhere. He has been quoted in the Wall Street Journal, National Public Radio, Public Radio International, BBC, The Nation, La Opinión, and numerous other publications in the United States and around the world.

Hernández publishes crimmigration.com, a blog about the convergence of criminal and immigration law. He has been a fulbright scholar in Slovenia and is currently a member of the American Bar Association Commission on Immigration.