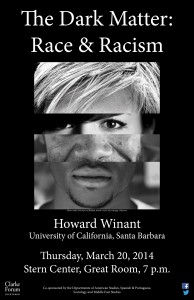 The Dark Matter: Race and Racism

Race and racism are in many ways the building blocks of the contemporary world and the social universe we take for granted.  The unfreedom, despotism, exclusion, inequality, and violence that are associated with the absolutist regimes from which contemporary society has evolved lives on in the profound presence of race and racism: the “dark matter” of our lives today.

This event is sponsored by the Clarke Forum for Contemporary Issues and co-sponsored by the Departments of American Studies, Spanish & Portuguese, Sociology, and Middle East Studies. 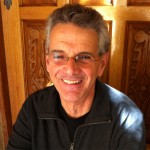 Howard Winant is a professor of sociology at the University of California, Santa Barbara, where he is also affiliated with the Black Studies and Chicana/o Studies departments.  He chaired the UCSB Law and Society program during the 2009-2010 academic year.  He received his Ph.D from the University of California, Santa Cruz in 1980.  He has worked and taught in Mexico, Brazil, and Argentina.

Winant is the founding director of the UC Center for New Racial Studies (UCCNRS), a MultiCampus Research Program active on all ten UC campuses. He is the author of The New Politics of Race: Globalism, Difference, Justice (University of Minnesota Press 2004); The World is a Ghetto: Race and Democracy Since World War II (Basic Books 2001); Racial Conditions: Politics, Theory, Comparisons (University of Minnesota Press 1994); Racial Formation in the United States: From the 1960s to the 1990s (co-authored with Michael Omi – Routledge 1986 and 1994); and Stalemate: Political Economic Origins of Supply-side Policy (Praeger 1988).