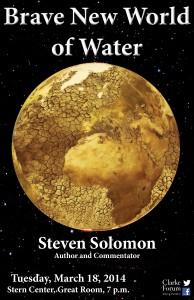 Freshwater, civilization’s most indispensable resource, is growing increasingly scarce. Solomon will explore how global water resource scarcity is transforming our economies, politics, environment, national security, basic human health and what we can do about these trends. 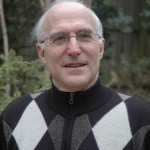 Steven Solomon has written for The New York Times, BusinessWeek, The Economist, Forbes, and Esquire. He has been a regular commentator on NPR’s Marketplace, and has appeared as a featured guest on the late the “CBS Evening News,” BBC-TV, “Morning Joe“ (MSNBC), “Tavis Smiley,” Tim Russert’s CNBC show, Al Jazeera, Fox News, “The Diane Rehm Show,” NPR’s Talk of the Nation, All Things Considered and The World, Larry Mantle’s “AirTalk,” “The Jim Bohannon Show,” Bloomberg TV, and various other news programs.

He is the author of Water: The Epic Struggle for Wealth, Power, and Civilization, which was a finalist for the prestigious Los Angeles Times Book Prize, and The Confidence Game, an insider account of global financial policymaking that presciently warned about building dangers of contagion in the volatile, interlinked financial system.
He is currently working on a new book, The Mississippi River and the Making of America: Past, Present, and Future. He lives in Washington, D.C., with his family.