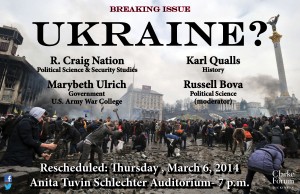 As the Sochi Olympics were drawing to a close, the long simmering tug-of-war between the EU and Russia over the future of Ukraine boiled over into street violence and political chaos in Kiev, the Ukrainian capital. This panel will examine the origins of this crisis, the interests at stake for Russia, the EU, and the US, and the possible outcomes and consequences for international relations and for Ukraine itself.

R. Craig Nation has been professor of strategy and director of Eurasian studies at the U.S. Army War College in Carlisle, Pennsylvania since 1996. He also serves as a visiting professor of security studies at Dickinson College. Professor Nation specializes in the foreign policy and security affairs of the Europan and Eurasian regions. He received is bachelor’s in history and political science from Villanova University and his Ph.D. in Russian and contemporary European history from Duke University.

Karl Qualls is associate professor of history at Dickinson College and specializes in Russian history. His first book, From Ruins to Reconstruction, details the rebuilding of Sevastopol, Ukraine after World War II. The book illustrates how this city, which is at the center of current Russia-Ukraine tensions, emerged from the war more clearly identified with Russia than the Soviet Union or Ukraine. He received his B.A. in history and Russian area studies from the University of Missouri at Columbia and his Ph.D. in Russian and East European History from Georgetown University.

Marybeth Peterson Ulrich is the professor of government in the Department of National Security and Strategy at the U.S. Army War

College. She received her Ph.D. in Political Science from the University of Illinois and a B.S  from the U.S. Air Force Academy where she was a Distinguished Graduate in the Class of 1984.  Her research interests are focused on strategic studies with a special emphasis on civil-military relations, European security, and national security democratization issues. Among Dr. Ulrich’s many publications is a book, Democratizing Communist Militaries: The Cases of the Czech and Russian Armed Forces. A colonel in the Air Force Reserve, she currently serves as the reserve air attaché to the Russian Federation.

Russell Bova is professor of political science and teaches a variety of courses on international relations and comparative politics. He has published numerous articles and book chapters on Russian politics and comparative democratization. His international relations textbook, How the World Works, and an accompanying book of readings, Readings on How the World Works, were published in 2009. He received his B.A. from  State University of New York at Buffalo and his M.A. and Ph.D. from Indiana University.