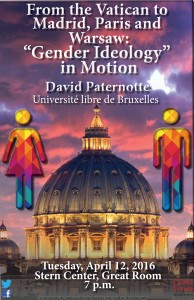 Lecturer in Sociology at the Université libre de Bruxelles

From the Vatican to Madrid, Paris and Warsaw: “Gender Ideology” in Motion

After decades of steady progress in terms of gender and sexual rights, several parts of Europe are facing new waves of resistance. These oppose the so-called ‘gender ideology,’ and unveil a crucial role of the Roman Catholic Church. This talk will give an overview of anti-gender movements in Europe.

The program is sponsored by the Clarke Forum for Contemporary Issues and co-sponsored by the Women’s and Gender Resource Center and the Departments of Sociology and Italian Studies. 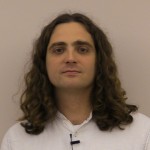 David Paternotte is a lecturer in sociology at the Université libre de Bruxelles. After many years of research on same-sex marriage, his work concentrates the processes of Europeanisation, globalisation and NGOisation of LGBTQI activism. He has recently started a project on new forms of opposition to gender, feminist claims and LGBTQI rights, with a focus on the Catholic Church. In addition to articles in journals like the Canadian Journal of political science, social politics, sexualities, or social movement studies, he is the author of Revendiquer le “mariage gay” . Belgique, France, Espagne (Editions de l’Université de Bruxelles, 2011) and the coeditor of several volumes, including The Lesbian and Gay Movement and the State: Comparative Insights into A Transformed Relationship (Ashgate, 2011 with M. Tremblay and C. Johnson), LGBT Activism and the Making of Europe: A Rainbow Europe? (Palgrave, 2014, with P. Ayoub), and the Ashgate Research Companion to Lesbian and Gay Activism (Ashgate, 2015, with M. Tremblay).