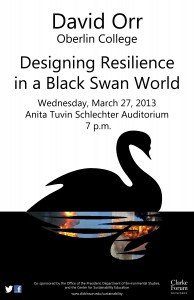 Black Swan events are those with low or unknown probability, but high, long-lived and often global impacts. Orr will discuss how we should design communities, regions, and nations to improve resilience and prosperity in the context of such events, with a focus on the Oberlin Project and the National Sustainable Communities Coalition.

The event is sponsored by The Clarke Forum for Contemporary Issues and the Office of the President, and co-sponsored by the Center for Sustainability Education and the Department of Environmental Studies.  It is also part of The Clarke Forum’s Leadership in a Age of Uncertainty Series and the faculty seminar series titled, Living in a World of Limits. 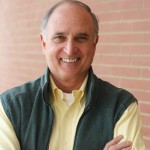 David Orr the Paul Sears Distinguished Professor of Environmental Studies and Politics and senior adviser to the president at Oberlin College. He is the author of seven books, including Down to the Wire: Confronting Climate Collapse (Oxford, 2009) and co-editor of three others. He has authored nearly 200 articles, reviews, book chapters, and professional publications. In the past twenty-five years he has served as a board member or adviser to eight foundations and on the boards of many organizations including the Rocky Mountain Institute and the Aldo Leopold Foundation. Currently he a trustee of the Bioneers, Alliance for Sustainable Colorado, and the WorldWatch Institute. He has been awarded seven honorary degrees and a dozen other awards including a Lyndhurst Prize, a National Achievement Award from the National Wildlife Federation, and recently a “Visionary Leadership Award” from Second Nature. He has lectured at hundreds of colleges and universities throughout the U.S., Europe, and Asia. He headed the effort to design, fund, and build the Adam Joseph Lewis Center, which was named by an AIA panel in 2010 as “the most important green building of the past thirty years,” and as “one of thirty milestone buildings of the twentieth century” by the U.S. Department of Energy. He is the executive director of the Oberlin project, an editor of the journal Solutions, and is a high level adviser to four grandchildren ages 2-12.