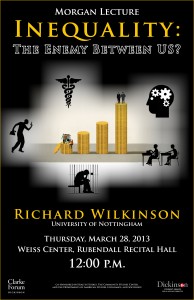 Inequality: The Enemy Between Us?

Since before the French Revolution, many people have believed that inequality is divisive and socially corrosive.  Now that we have data allowing us to compare inequality within countries, we find that this intuition is more true than we thought.  Countries like the USA, with relatively large income gaps between rich and poor, suffer much more from a wide range of social ills.

The event is sponsored in partnership with The Clarke Forum for Contemporary Issues and the Student Senate Public Affairs Committee, and co-sponsored by Health Studies, the Departments of American Studies, Sociology and Economics and the Community Studies Center. 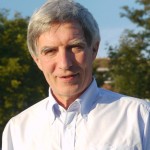 Richard Wilkinson has played a formative role in international research on the social determinants of health and on the societal effects of income inequality. He studied economic history at London School of Economics before training in epidemiology. He is professor emeritus of social epidemiology at the University of Nottingham Medical School, honorary professor at University College London and a visiting professor at the University of York. Richard co-wrote The Spirit Level with Kate Pickett which won the 2011 Political Studies Association Publication of the Year Award and the 2010 Bristol Festival of Ideas Prize. Richard is also a co-founder of The Equality Trust.