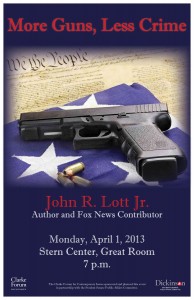 The talk will argue that crime rates fall when law-abiding citizens are given the chance to defend themselves.

The Clarke Forum for Contemporary Issues has sponsored and planned this event in partnership with the Student Senate Public Affairs Committee.  Please note that college policy prohibits the possession of firearms on college premises.

Biography (provided by the speaker)
John R. Lott Jr. is an economist who has held research and/or teaching positions at the Universi 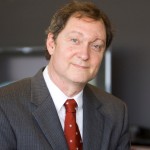 ty of Chicago, Yale University, Stanford, UCLA, Wharton, and Rice and was the chief economist at the United States Sentencing Commission during 1988 and 1989. He has published over 100 articles in academic journals. He also is the author of seven books of which his newest is At the Brink: Will Obama push us over the edge? His past books have included three editions of More Guns, Less Crime and Freedomnomics. Lott is a FoxNews.com contributor and a weekly columnist for them. Opinion pieces by Lott have appeared in such places as The Wall Street Journal, The New York Times, The Los Angeles Times, The New York Post, USA Today, and The Chicago Tribune. He has appeared on such television programs as the ABC and NBC National Evening News broadcasts, Fox News, The NewsHour with Jim Lehrer, and the Today Show. He received his Ph.D. in economics from UCLA in 1984.