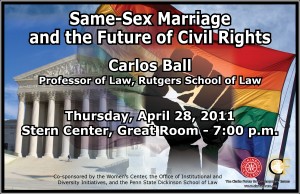 Same-Sex Marriage and the Future of Civil Rights

As a result of the efforts of the marriage equality movement, the country for the last two decades has been debating the purposes of marriage and the place of LGBT people in our society. Those who are against gay marriage have relied on historical, moral, and institutional arguments about why marriage must remain the union of one man and one woman. In contrast, those who favor the recognition of same-sex marriage have relied on considerations of fairness, justice, and equality to argue, in effect, that there should be no gender-based barriers to marriage. This debate requires all of us to choose among these irreconcilable positions. The fact that a growing number of Americans, especially young ones, favor a more expansive definition of marriage bodes well for those committed to protecting the basic civil rights of sexual minorities.

The event is co-sponsored by the Women’s Center and the Office of Institutional and Diversity Initiatives.

Carlos A. Ball is a professor of law at Rutgers University (Newark). He is the author of The Right to Be Parents: How LGBT Mothers and Fathers Revolutionized Family Law (NYU Press, 2012); From the Closet to the Courtroom: Five LGBT Rights Cases That Have Changed Our Nation (Beacon, 2010); and The Morality of Gay Rights: An Exploration in Political Philosophy (Routledge, 2003). He is also the co-editor of Cases and Materials on Sexual Orientation and the Law (West, 2008). He has written numerous law review articles on LGBT rights issues and spoken at many conferences, including ones sponsored by Association of American Law Schools, the Law and Society Association, the American Philosophical Association, and the American Political Science Association. He also blogs for the Huffington Post.