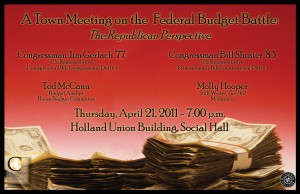 The current budget battle at the national level reflects the ongoing contentious debate over the future role of government in American society. This town meeting will explore the perspective of the Republican party on issues involving the federal deficit, taxes, entitlements, spending cuts, and debt ceilings.

Biographies
Congressman Bill Shuster ’83
Throughout his ten year career in the House, Congressman Shuster has proven himself to be a leader on local and national issues, and an outspoken advocate for the people of the 9th Congressional District in Washington, DC.

The 112th Congress marks Congressman Shuster’s elevation to the rank of Chairman of the Subcommittee on Railroads, Pipelines and Hazardous Materials of the House Transportation and Infrastructure Committee. This subcommittee is one of the most important transportation subcommittees in the House due to its jurisdiction over everything involving rail transportation, from AMTRAK passenger to freight and cargo rail, employee contracts, and rail security.

In addition to Congressman Shuster’s expanded role on transportation policy, he continues to be an active voice in national security matters. Shuster’s position on the House Armed Services Committee’s Subcommittee on Terrorism, Unconventional Threats and Capabilities provides him valuable insight into the Global War on Terror and how our military should transform to meet emerging threats, especially the threat of Islamic fundamentalism.

In addition to gaining experience in agriculture by working on his family’s farm in Bedford County, Shuster earned valuable marketing and management experience with the Goodyear Tire and Rubber Corporation as well as with Bandag Incorporated where he served as District Manager. He is also an experienced small business owner. Prior to his arrival in the House of Representatives, Shuster owned and operated his own small business, an automobile dealership, in East Freedom, Pennsylvania.

Bill Shuster was born in McKeesport, Pennsylvania on January 10, 1961. After graduating from Everett High School he attended Dickinson College in Carlisle, where he received a Bachelor of Arts in Political Science and History. Shortly thereafter he went on to earn a Masters of Business Administration (MBA) from American University in Washington, D.C.

Congressman Shuster resides in Hollidaysburg, Pennsylvania with his wife and two children.

Congressman Gerlach ’77
Jim has spent nearly 20 years in public service representing the citizens of Southeastern Pennsylvania. His distinguished career began in 1990 with the first of two terms in the Pennsylvania House of Representatives, which was followed by two terms in the state Senate. During his 12 years in the state legislature, Jim established himself as an effective advocate for Pennsylvania taxpayers. His efforts helped promote efficiency and streamline government, which saved taxpayers hundreds of millions of dollars.

Jim was the prime sponsor of landmark welfare reform legislation that reduced the state’s welfare rolls by over 150,000 cases. Jim was elected to Congress in 2002 and is serving his fourth term in the U.S. House of Representatives. He serves on the House Financial Services and Transportation and Infrastructure committees.

One of his biggest legislative accomplishments was creating a much-needed veterans cemetery here in Southeastern Pennsylvania. The bill Jim authored was signed into law by the President on Veterans Day in 2003, and the cemetery opened in Bucks County in 2009.

Jim has been a tireless advocate for allowing entrepreneurs, small business owners and other job creators to keep more of their hard-earned pay to purchase new equipment and put people to work rather than sending more tax dollars to Washington.

He stood with Pennsylvania businesses and voted last June against a cap and trade bill, which would result in the loss of approximately 1,600 construction jobs and another 4,000 manufacturing here in the 6th District and crippling increases in utility bills.

Jim also opposes the “Card Check” legislation, which would take away an individuals’ right to vote on forming union in private — free from possible coercion and other improper pressure.While working to keep taxes low, Jim also believes it is important to make sure taxpayers see a positive return on the dollars they do send to Washington.

That’s why he continues working hard to re-establish commuter rail service between Wyomissing and Philadelphia through the R-6 Extension passenger rail project and has been successful in securing funding for police departments, colleges, universities, hospitals, nonprofit groups and others in Chester County and throughout the 6th District.

A lifelong Pennsylvania resident, Jim Gerlach grew up in Ellwood City – a small town in western Pennsylvania about an hour north of Pittsburgh. He received a bachelor’s degree at Dickinson College in 1977 and his juris doctor at Dickinson School of Law in 1980. Gerlach currently lives in Chester Springs with his wife Karen. They have six children.

Ted McCann
Ted McCann is a budget analyst for the Republican staff of the House Budget Committee. In this capacity, he is the lead analyst for income support programs, Social Security, pension policy and agriculture policy. Additionally, he spent nine months as the lead House Budget Committee staff member for the National Commission on Fiscal Responsibility and Reform, or the Fiscal Commission. He assisted the Fiscal Commission in policy formation for their final product, The Moment of Truth.

McCann holds a B.A. in economics from Miami (Ohio) University.

Molly Hooper is a staff writer for The Hill and previously worked as a page at the U.S. House of Representatives, as a Capitol Hill Newsgathering Producer at Fox News, and as a leadership reporter at Congressional Quarterly .