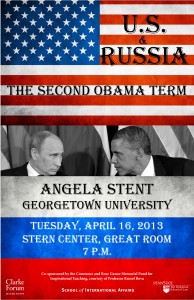 The U.S-Russian relationship faces new challenges as President Barack Obama embarks on his second term. Both countries will have to reassess the relative priority of interests versus values as they seek to move forward.

This event is jointly sponsored by the Clarke Forum for Contemporary Issues, Penn State Dickinson School of Law and School of International Affairs, and the Constance and Rose Ganoe Memorial Fund for Inspirational Teaching, courtesy of Professor Russell Bova. 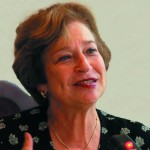 Angela Stent is director of the Center for Eurasian, Russian and East European Studies and professor of government and foreign service at Georgetown University. She is also a senior fellow (non-resident) at the Brookings Institution and co-chairs its Hewett Forum on Post-Soviet Affairs. From 2004-2006 she served as National Intelligence Officer for Russia and Eurasia at the National Intelligence Council.  From 1999 to 2001, she served in the Office of Policy Planning at the U.S. Department of State.

Stent’s academic work focuses on the triangular political and economic relationship between the United States, Russia and Europe.  Her publications include: Russia and Germany Reborn: Unification, The Soviet Collapse and The New Europe (Princeton University Pres, 1999); From Embargo to Ostpolitik: The Political Economy of West German-Soviet Relations, 1955-1980  (Cambridge University Press, 1981); “Repairing US-Russian Relations: A Long Road Ahead”  (2009) “Restoration and Revolution in Putin’s Foreign Policy,” (2008), “An Energy Superpower? Russia and Europe” (2008) and “Reluctant Europeans: Three Centuries of Russian Ambivalence Toward the West,” (2007). She is currently writing a book about US-Russian relations since 2000.

Stent is a member of Admiral Stavridis’  EUCOM Advisory Panel and a member of the Council on Foreign Relations.  She is a contributing editor to Survival and is on the editorial boards of the Journal of Cold War Studies, World Policy Journal and Internationale Politik. She is on the International Advisory Board of Russia Profile. She is a member of the Advisory Board of the Eurasia Foundation and of Supporters of Civil Society in Russia. Dr. Stent received her B.A. from Cambridge University, her MSc. from the London School of Economics and Political Science and her M.A. and PhD. from Harvard University.