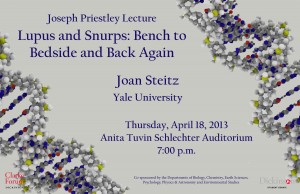 Lupus and Snurps: Bench to Bedside and Back Again

This talk will trace the origins of our understanding of how small cellular particles contribute to the critical process of splicing and relate this knowledge to today’s quest for treatment of splicing diseases, such as Lupus.

The Joseph Priestley Award recipient is chosen by a different science department each year.  This year the recipient was selected by the Department of Biology.  The event is sponsored by The Clarke Forum for Contemporary Issues and Student Senate and co-sponsored by and the Departments of Biology, Chemistry, Earth Sciences, Psychology, Physics & Astronomy and Environmental Studies.

Joan Steitz is a Sterling Professor of Molecular Biophysics and Biochemistry; and Investigator at Howard Hughes Medical Institute, Yale University.

Steitz earned her B.S. in chemistry from Antioch College in 1963. Significant findings from her work emerged as early as 1967, when her Harvard PhD thesis with Jim Watson examined the test-tube assembly of a ribonucleic acid (RNA) bacteriophage (antibacterial virus) known as R17.

Steitz spent the next three years in postdoctoral studies at the Medical Research Council Laboratory of Molecular Biology in Cambridge, England, where she used early methods for determining the biochemical sequence of RNA to study how ribosomes know where to initiate protein synthesis on bacterial mRNAs. In 1970, she was appointed assistant professor of molecular biophysics and biochemistry at Yale, becoming full professor in 1978. At Yale, she established a laboratory dedicated to the study of RNA structure and function. In 1979, Steitz and her colleagues described a group of cellular particles called small nuclear ribonucleoproteins (snRNPs), a breakthrough in understanding how RNA is spliced. Subsequently, her laboratory has defined the structures and functions of other noncoding RNPs, such as those that guide the modification of ribosomal RNAs and several produced by transforming herpesviruses.  Today, her studies of noncoding RNAs include microRNAs.

Steitz is an investigator of the Howard Hughes Medical Institute, a member of the American Academy of Arts and Sciences, the American Philosophical Society, the National Academy of Sciences, and the Institute of Medicine. Her many honors include the U.S. Steel Foundation Award in Molecular Biology (1982), the National Medal of Science (1986), the Lewis S. Rosenstiel Award (2002), the FASEB Excellence in Science Award (2003), the RNA Society Lifetime Achievement Award (2004), E.B. Wilson Medal (2005), Gairdner Foundation International Award (2006), and Albany Medical Center Prize in Medicine and Biomedical Research (2008),  [shared with Elizabeth Blackburn], Harden Jubilee Medal, British Biochemical Society (2009), The Robert J. and Claire Pasarow Foundation 23rd Annual Medical Research Award for Extraordinary Achievement in Cancer Research (2011), The Pearl Meister Greengard Prize (2012). She is the recipient of 15 honorary degrees.