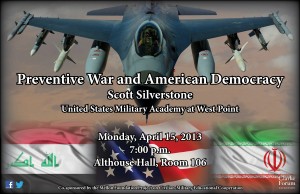 Ten years after the United States launched the first preventive war in its history – against Iraq in 2003 – American leaders are once again wrestling with the preventive war temptation, this time directed at Iran and its nuclear program. This lecture will explore and explain this profound shift in American thinking about preventive war over the past sixty years.

This event is sponsored by the Clarke Forum for Contemporary Issues and the Mellon Foundation Project on Civilian-Military Educational Cooperation.  It is also part of The Clarke Forum’s Leadership in a Age of Uncertainty Series. 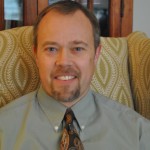 Biography (provided by the speaker)
Dr. Silverstone is professor of international relations in the Department of Social Sciences at the United States Military Academy at West Point, where he has been on the faculty since 2001. He received his Ph.D. in political science from the University of Pennsylvania in 1999, and has also served on the faculty at the University of Pennsylvania and Williams College. Dr. Silverstone is a research fellow with the Carnegie Council for Ethics in International Affairs, and is the author of Preventive War and American Democracy (Routledge Press, 2007) and Divided Union: The Politics of War in the Early American Republic (Cornell University Press, 2004), as well as journal articles and book chapters on international security and American foreign policy. He is currently writing a book on preventive war and the rise of German power in the 1930s.

Dr. Silverstone began his career as a U.S. naval officer. From 1987 to 1990 he was a naval flight officer and mission commander with a P-3 Orion squadron at Naval Air Station Barbers Point, Hawaii, and deployed extensively throughout the western Pacific, the Indian Ocean, the Persian Gulf and East Africa conducting anti-submarine operations and maritime reconnaissance. From 1990 to 1993 he served on the staff of the Deputy Chief of Naval Operations for Plans, Policy and Operations in the Pentagon, managing the Navy’s portion of the White House-directed nuclear attack survivability program and all Navy participation in the Joint Chiefs of Staff-sponsored global crisis management exercise program and the NATO crisis exercise program. From September 1992 to April 1993 he served as the director of the Navy’s Crisis Action Center in the Pentagon for planning and support of Operation Restore Hope in Somalia. Between 1993 and 2000, Dr. Silverstone was a naval reserve officer serving in the Navy Command Center in the Pentagon.