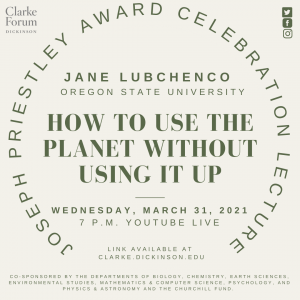 How to Use the Planet Without Using It Up

Environmental science provides valuable insights into timely solutions to urgent, global challenges.  It is possible to address climate change, loss of biodiversity, food provisioning, and inequities, but only with integrated, holistic approaches.  Knowledge, coupled with engagement of civil society and leaders from business, faith, youth, and governments, provides hope for the future.

The Joseph Priestley Award recipient is chosen by a different science department each year. The Department of Environmental Studies has selected this year’s recipient. The event is supported by the College’s Priestley Fund and is sponsored by the Clarke Forum for Contemporary Issues and co-sponsored by the departments of biology, chemistry, earth sciences, environmental studies, mathematics & computer science, psychology, and physics & astronomy and the Churchill Fund.  It is part of the Clarke Forum’s Leadership in an Age of Uncertainty Series. 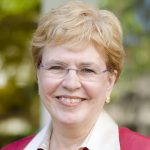 The Honorable Jane Lubchenco, Ph.D., University Distinguished Professor at Oregon State University, is a marine ecologist with expertise in the ocean, climate change, and interactions between the environment and human well-being. She served as the U.S. Under Secretary of Commerce for Oceans and Atmosphere and Administrator of the National Oceanic and Atmospheric Administration (NOAA) and inaugural member of President Barack Obama’s Science Team from 2009-2013. From 2014-2016, she was the first U.S. State Department Science Envoy for the Ocean, serving as a science diplomat to China, Indonesia, South Africa, Mauritius and the Seychelles. Lubchenco was recently named deputy director for Climate and Environment in the White House Office of Science and Technology Policy.

Lubchenco has served as the president of numerous professional scientific societies including the Ecological Society of America, the American Association for the Advancement of Science (AAAS) and the International Council for Science (ICSU).  She has served on multiple national commissions including the Pew Oceans Commission, the Joint Ocean Commission Initiative, and the Aspen Institute Arctic Commission. She has led or contributed to multiple regional, national, and international scientific assessments on climate change, biodiversity, Marine Protected Areas, the ocean, and the intersection of science and society.  Most recently, she co-chaired the Expert Group for the High Level Panel for a Sustainable Ocean Economy, a pioneering partnership across 14 serving heads of state or government to harness science and action to protect the ocean effectively, produce from it sustainably, and prosper equitably.

She co-founded three organizations that train scientists to be better communicators and engage more effectively with the public, policy makers, media and industry, the Leopold Leadership Program, COMPASS, and Climate Central.  She leads the MPA-Project, a global partnership to provide science-based understanding of Marine Protected Areas to achieve multiple environmental and social outcomes.  She actively connects science to the public and policy makers through a range of philanthropic, civil society, governmental and intergovernmental organizations and activities.

The Joseph Priestley Award is presented by Dickinson College in memory of Joseph Priestley, discoverer of oxygen, to a distinguished scientist whose work has contributed to the welfare of humanity. The award, first presented in 1952, recognizes outstanding achievement and contribution to our understanding of science and the world.