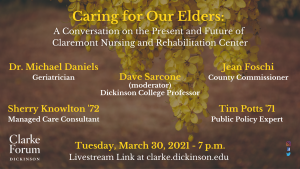 Caring for Our Elders: A Conversation on the Present and Future of Claremont Nursing and Rehabilitation Center

The Claremont Nursing and Rehabilitation Center has been a Cumberland County resource since 1829. It is a community-based non-profit with an open admission policy, focused on providing quality skilled nursing services to residents in a caring and dignified environment. However, deficit budgets in recent years have prompted the County Commissioners to decide to sell the Center to a private nursing home facility provider in order to avoid property tax increases. There are currently two potential buyers, and commissioners anticipate that a sale will be finalized by the summer of this year. This event will explore potential costs to our residents of a sale and discuss ways the center might be kept as a county owned resource.

Dr. Michael Daniels, MD, MBA, is a general practitioner based in Mount Holly Springs. He is a residency trained, board certified family physician with additional certification in geriatrics. For 35 years he has attended nursing home patients in Carlisle. He served for over 20 years as the medical director for Church of God Nursing Home and is the current medical director for Thornwald Nursing Home. He has been recognized as a certified medical director by the American Board of Post-Acute and Long-Term Care Medicine.

Jean Foschi is vice-chairman and is the newest member of the Cumberland County Board of Commissioners serving her first term. She serves as the liaison for a number of boards and commissions.  She is a 20 year resident of the county and served on the Upper Allen Township Zoning Board, since 2005, most recently as chairperson. 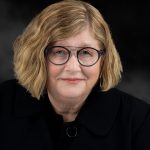 Knowlton held a variety of positions in her 20+ years at the Pennsylvania Department of Public Welfare.  In her last role there, as deputy of secretary for Medical Assistance Programs, she was responsible for the Commonwealth’s $6 billion Medicaid program, serving over 1.7 million persons.

Knowlton is also the author of the Alexa Williams series of suspense novels, including the just-released Dead on the Delta. 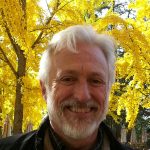 Tim Potts ’71, is a 48-year veteran of the public policy scene in Pennsylvania with government credentials in economic development, public welfare, and education.

He has a bi-partisan political pedigree. Republican Gov. Dick Thornburgh appointed Potts to the Department of Education in 1984, and Democratic Gov. Bob Casey promoted him to deputy chief of staff, supervising new programs including student testing, teacher testing, and initiatives for at-risk students.

Potts left the Department of Education in 1990 to work for the House Democratic Caucus as press secretary and director of communications until 1997, when he became director of the Pennsylvania School Reform Network. There he advocated for an equitable and adequate system of funding for public education.

In August 2004, he co-founded Democracy Rising PA, a citizen coalition working to give Pennsylvania the highest standards of public integrity in America. For his work to repeal the 2005 pay raise for state officials and to remove a state Supreme Court justice from the bench for the first time in Pennsylvania history, Potts was one of three people honored by The Philadelphia Inquirer as Citizens of the Year in 2005. In 2006, he received the Public Service Achievement Award from Common Cause Pennsylvania.

He also served seven years as an elected school board member for the Carlisle Area School District. 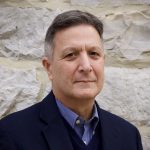 Dave Sarcone, Ph.D. (moderator) is an associate professor at Dickinson College in the Department of International Business and Management. Prior to joining the Dickinson faculty, Sarcone enjoyed a healthcare career spanning more than twenty years as a senior financial and operations leader with experience in rural health, multi-specialty medical practice, and regional health systems operations. Sarcone has served as an investigator or faculty on grant-funded projects exploring state, national and international health-related topics, and was instrumental in the design and development of Dickinson College’s Health Studies Certificate Program. Research interests include both health care management and community health planning and management issues.