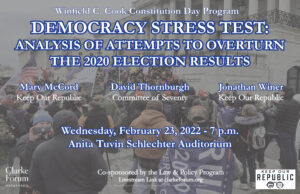 Although Joe Biden won the 2020 Presidential Election by 306 to 232 votes in the Electoral College (and by 7 million in the popular vote), Donald Trump refused to acknowledge the result and instead led an unprecedented onslaught of legal challenges in state and federal courts with an array of claims of voter fraud and conspiracy. When the court challenges failed, President Trump continued to seek ways to overturn the election results. These efforts culminated in the assault on Congress on January 6th, one of the most serious threats ever to our democracy. Our democracy prevailed, but weaknesses were exposed. In this program our panelists will discuss some of these weaknesses and how we might address them moving forward.

The initial impetus for this evening’s program was offered by Keep Our Republic, a non-profit organization whose mission is “to discover, highlight and help to prevent an array of extraordinary threats to American democracy, strengthen democratic guardrails, and educate the public before it is too late.”  Their civic creed is: “Let all citizens vote. Let all votes be counted. Let the count stand.” We would like to thank Ari Mittleman of KOR for reaching out and helping to make this program possible. 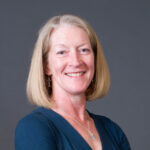 Mary McCord is executive director of the Institute for Constitutional Advocacy and Protection (ICAP) and a visiting professor of law at Georgetown University Law Center. At ICAP, McCord leads a team that brings constitutional impact litigation at all levels of the federal and state courts across a wide variety of areas including First Amendment rights, immigration, criminal justice reform, and combating the rise of private paramilitaries.
McCord previously served as the acting assistant attorney general for National Security at the U.S. Department of Justice, principal deputy assistant attorney general for National Security,  and assistant U.S. attorney for nearly 20 years at the U.S. Attorney’s Office for the District of Columbia.

McCord is a statutorily designated amicus curiae for the Foreign Intelligence Surveillance Court and Foreign Intelligence Surveillance Court of Review. McCord served as legal counsel to the U.S. House of Representatives Task Force 1-6 Capitol Security Review appointed by Speaker Nancy Pelosi after the January 6, 2021, attack on the U.S. Capitol. McCord also served on the Columbus Police After Action Review Team tasked with evaluating how the Columbus, Ohio, Police Department responded to the 2020 summer protests.

McCord is a nonresident senior fellow at the Atlantic Council and a nonresident fellow at the George Washington University Program on Extremism. She has written about domestic terrorism, unlawful militia activity, public safety, and the rule of law for publications including The Washington Post, The New York Times, Wall Street Journal, Los Angeles Times, The Atlantic, Slate, Lawfare, and Just Security. She has appeared on NPR, PBS, CNN, MSNBC, ABC, and other media outlets.

McCord received the Oliver White Hill Courageous Advocate Award from the Virginia Trial Lawyers’ Association in 2018, based on her work with ICAP litigating against white supremacist and private militias that attended the Unite the Right rally in Charlottesville, Virginia, in 2017.

She graduated from Georgetown University Law School and served as a law clerk for Judge Thomas Hogan of the U.S. District Court for the District of Columbia. 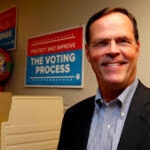 David Thornburgh is a nationally recognized “civic entrepreneur” who throughout his career has created and led high impact initiatives to promote economic development and good government in Pennsylvania.

He was named a senior advisor to the Committee of Seventy (C70) in January 2022 after serving as its president and CEO from November, 2014 to December 2021. Seventy is Pennsylvania’s oldest and largest good government group and over the years has championed measures to limit the role of money in politics, make government more accountable and transparent, and educate and engage citizens in the political process. In his current role he chairs Seventy’s signature Draw the LInes PA initiative, which he co-founded and which has enlisted 7,211 PA citizens in drawing their own congressional maps and advocating for more citizen engagement in the redistricting process. He also serves as chair of Open Primaries PA, a campaign incubated at C70 which seeks to open primary elections to the nearly one million PA voters who currently can’t vote for candidates in primary elections because they are registered as independents.

Thornburgh came to Seventy from the University of Pennsylvania’s Fels Institute of
Government, where he served as executive director for almost 7 years. While at Fels he
doubled applications to the program, created an annual national Public Policy Challenge
student competition in partnership with Governing magazine that drew teams from twelve top universities, and launched an innovative hybrid Executive MPA program.

Thornburgh served as executive director of the Economy League of Greater Philadelphia from 1994 to 2006 where, under his leadership, the League became one of the nation’s best regional “think and do tanks.” There he co-founded Graduate! Philadelphia, an innovative approach to encourage adults to come back to college to complete their degree that has since been replicated in dozens of communities across the country. He also co-founded Campus Philly, an organization dedicated to increasing the magnetic pull of the Philadelphia region for college students and young college graduates.

From 1988 to 1994 he served as director of the Wharton Small Business Development Center, the consulting and training arm of The Wharton School’s Entrepreneurial Center, where he founded The Enterprise Center, a nationally recognized business accelerator serving minority businesses, and co-founded the Philadelphia 100, an annual celebration of the region’s fastest growing privately held companies.

Thornburgh has received a number of awards for his professional and civic leadership. In 2006 he was recognized as one of the 101 most trusted and respected civic “connectors” in the Philadelphia area by LEADERSHIP Philadelphia. In 2000, he was awarded an Eisenhower Fellowship and traveled to Australia and New Zealand to learn about entrepreneurial development and public management in those countries. He has also appeared frequently in local and national media, is an accomplished keynote speaker, and has moderated and participated in dozens of panel discussions and roundtables on a variety of topics.

An avid reader of history and political biographies, he has also taught graduate and
undergraduate courses in politics, leadership, and economic development at the University of Pennsylvania, Drexel University, Temple University, and Franklin and Marshall College. He was appointed a professor of practice in Temple’s Masters of Public Policy program in January 2022.

Thornburgh holds a bachelor’s in political science from Haverford College and a master’s  in public policy from Harvard Kennedy School. His father, Dick Thornburgh, served as
Pennsylvania Governor from 1979 to 1987 and U.S. Attorney General from 1988 to 1991. 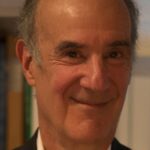 Jonathan M. Winer is the former U.S. deputy assistant secretary of state for International Law Enforcement, U.S. special envoy for Libya, and was counsel to Senator John Kerry for ten years, during which he worked extensively on election law legislation and policy. He was awarded the two highest honors granted by the State Department for extraordinary service, which stated that “the scope and significance of his achievements are virtually unprecedented for any single official.”

Educated at Yale and at NYU Law School, he has practiced election and political compliance law, and most recently written on the legal and enforcement issues associated with the 2020 elections for The Washington Spectator and Just Security.  He serves on the advisory council of Keep Our Republic, a non-partisan civic action organization dedicated to protecting a republic of laws and strengthening the checks and balances of our democratic system. He also cohosts the podcast series, Unconventional Threat at Unconventionalthreat.com,  which has addressed the unusual threats that are currently posed to our democracy.