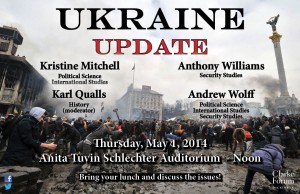 Following Russia’s annexation of the former Ukrainian province of Crimea, the United States and its European allies have imposed sanctions on Russia, but pro-Russian Ukrainian separatists have responded by occupying government buildings in eastern Ukrainian cities and Russia has demanded that the Ukraine adopt a federal constitutional structure that would grant considerable autonomy to Russian-speaking areas of the country.  The panel will consider the implications of these ongoing developments from the perspective of the Ukrainian government in Kiev, NATO, the European Union, Russia, and United States.

Biographies of the Panelists

Kristine Mitchell is assistant professor of political science and international studies at Dickinson College. Her teaching and research interests include European and EU politics, labor politics, and Left parties. She has conducted field research across Western Europe and has held visiting and short-term appointments at the Institute for European Studies at UC Berkeley, the Center for European Studies at New York University, the Institut d’Etudes Politiques (Sciences Po) in Paris, and the Department of Political Science at Northwestern University.

Anthony Williams is a retired CIA senior intelligence officer with a wide range of experience performing an array of domestic and foreign assignments in analysis, operations and management for nearly 32 years.  Experience includes deputy chief of the Arms Control Intelligence Staff,  deputy national intelligence officer for Theater Forces,  chief of strategic planning for Overhead Imagery,  chief of the Russian Affairs Division, chief of the Counterproliferation Interdiction Group, deputy assistant director of Central Intelligence for Collection and executive assistant to the director of Central Intelligence (DCI). Williams held several senior policy-making positions in the national security arena including deputy assistant secretary of defense for Eurasian Policy and congressional fellow in the offices of Senator Sam Nunn and Congressman Edward Markey.  Williams is currently a visiting professor of security studies at Dickinson College and a distinguished fellow of the U.S. Army War College.

Andrew Wolff is an assistant professor of political science, international studies, and security studies at Dickinson College in Carlisle, Pennsylvania. He received his doctorate in international relations from Johns Hopkins University School of Advanced International Studies (SAIS) in 2010. He also holds a bachelor’s degree in politics and European history from Washington and Lee University and a master’s degree in European studies from Johns Hopkins University SAIS. Prior to his graduate work, he worked as a legal staff assistant in the United States Senate and as an English teacher in Prague, Czech Republic. His primary research interests are geopolitical theory, NATO security issues, transatlantic relations, U.S. foreign policy, and international diplomacy. His most recent publication is “Crafting a NATO Brand: Bolstering Internal Support for the Alliance through Image Management” (Contemporary Security Policy April 2014).

Karl Qualls (moderator) is associate professor of history at Dickinson College and specializes in Russian history. His first book, From Ruins to Reconstruction, details the rebuilding of Sevastopol, Ukraine after World War II. The book illustrates how this city, which is at the center of current Russia-Ukraine tensions, emerged from the war more clearly identified with Russia than the Soviet Union or Ukraine. He received his B.A. in history and Russian area studies from the University of Missouri at Columbia and his Ph.D. in Russian and East European History from Georgetown University.