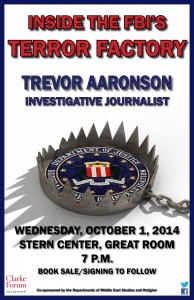 Inside the FBI’s Terror Factory

Aaronson, author of The Terror Factory: Inside the FBI’s Manufactured War on Terrorism, will explore how the FBI has built up a network of more than 15,000 informants whose primary purpose is to infiltrate Muslim communities to create and facilitate phony terrorist plots so that the government can then claim victory in the War on Terror.  A book sale and signing will follow the presentation.

The event is sponsored by The Clarke Forum for Contemporary Issues and co-sponsored by the departments of Middle East studies and religion.

Trevor Aaronson is an accomplished investigative journalist and author of The Terror Factory: Inside the FBI’s Manufactured War on Terrorism.  Aaronson reported and produced a one-hour documentary for Al Jazeera Media Network, “Informants,” about the FBI’s counterterrorism program. He co-founded the nonprofit Florida Center for Investigative Reporting, which won national and regional journalism awards under his leadership, and has written for Mother Jones magazine. A two-time finalist for the Livingston Awards, Aaronson has won more than two dozen national and regional awards, including the Molly National Journalism Prize, the international Data Journalism Award and the John Jay College/Harry Frank Guggenheim Excellence in Criminal Justice Reporting Award.