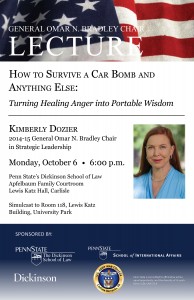 How to Survive a Car Bomb and Anything Else: Turning Healing Anger into Portable Wisdom

Dozier’s presentation will draw on her experience covering the war in Iraq for CBS News from 2003 until May 29, 2006, when she was critically wounded in a car bombing that killed the U.S. Army officer that her team was filming, Capt. James Alex Funkhouser, his Iraqi translator “Sam,” and her CBS colleagues, cameraman Paul Douglas and soundman James Brolan. Dozier recounted the attack in Iraq, her injuries, and the long road to recovery, in her memoir, Breathing the Fire: Fighting to Report and Get Back to the Fight.

Biography
Kimberly Dozier is a CNN and Daily Beast contributor and former correspondent for The Associated Press and CBS News. She has received many Edward R. Murrow Awards; a Peabody Award; and three American Women in Radio and Television (AWRT) Gracie Awards. She is the first woman journalist to receive the National Medal of Honor Society’s Tex McCrary Award for her coverage of Iraq. She is a member of the Council of Foreign Relations.