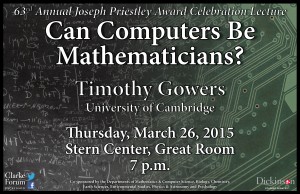 Can Computers Be Mathematicians?

The ability to solve mathematical problems is often regarded as mysterious and requiring flashes of inspiration that come from nowhere. Gowers will argue that it is nothing of the kind, and that eventually computers will be better than we are at mathematics.

The Joseph Priestley Award recipient is chosen by a different science department each year.  The Department of Mathematics and Computer Science has selected this year’s recipient, Timothy Gowers. The event is supported by the College’s Priestley Fund and is sponsored by the Clarke Forum for Contemporary Issues  and Student Senate and co-sponsored by the departments of mathematics & computer science, biology, chemistry, earth sciences, environmental studies,  physics & astronomy, and psychology. 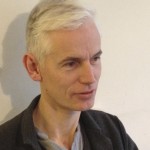 Biography (provided by the speaker)
Timothy Gowers was born in Marlborough, England in 1963 in a family of musicians. He was a chorister in the choir of King’s College Cambridge, and went from there to Eton and then to Trinity College Cambridge where he read mathematics. He has spent almost all of his career in Cambridge, where he is currently the Rouse Ball Professor of Mathematics, and also a Royal Society Research Professor. He was awarded a Fields Medal in 1998 for his work in Banach space theory and combinatorics. He is the author of Mathematics, A Very Short Introduction, and the main editor of The Princeton Companion To Mathematics, for which he won the Euler Book Prize of the Mathematical Association of America in 2011.