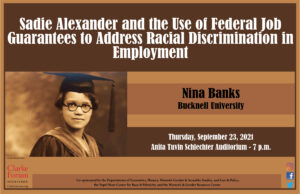 This program is sponsored by the Clarke Forum for Contemporary Issues and co-sponsored by the departments of economics, history, women’s gender & sexuality studies, and law & policy, the Popel Shaw Center for Race & Ethnicity, and the Women’s & Gender Resource Center. 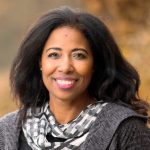 Nina Banks is associate professor of economics and an affiliate of women’s and gender studies and Africana studies, the faculty director of Bucknell in Ghana, and Bucknell’s academic director of the Shepherd Higher Education Consortium on Poverty. She is president of the National Economic Association (NEA) and serves on the board of directors of the Economic Policy Institute (EPI) and editorial board of The Review of Black Political Economy.  Previously she served on the board of the International Association for Feminist Economics (IAFFE). Her research makes visible the unseen work of Black and other marginalized women by developing an economics of their unpaid work and community activism against racial and ethnic disparities. Her determination to restore Black women to U.S. economic history led to the recovery of the economic thought of the first Black American economist, Sadie T.M. Alexander.

Banks is the founder and organizer of the annual Freedom and Justice conference of the National Economic Association (NEA) and the American Society of Hispanic Economists (ASHE).  The social justice conference brings together a small group of scholars who are dedicated to finding solutions to the pressing economic problems facing racialized communities.  In 2018, she participated in a Congressional hearing sponsored by the Progressive Caucus and last February she joined Congresswoman Pressley in a national press call that issued a resolution for a federal job guarantee.

Banks holds a doctorate in economics from the University of Massachusetts Amherst and a bachelor’s degree in economics and social history from Hood College.  In addition to Democracy, Race, and Justice: The Speeches and Writings of Sadie T. M. Alexander (Yale University Press, 2021), Banks has three other books under contract.  Her research has been featured in popular media outlets that include NPR, The Economist, The New York Times, SiriusXM’s Urban View, the Financial Times’ Alphachat podcast, the Wall Street Journal’s Future of Everything Festival, and the State of Working America podcast.