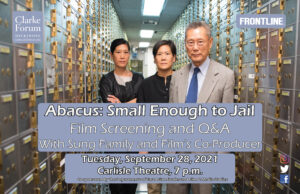 The 2008 financial crisis, with subprime mortgages at its heart, brought the global financial system to its knees and initiated the worst economic recession in decades. This documentary investigates why Abacus, a small bank serving Manhattan’s Chinatown community, was the only commercial bank in the United States to be prosecuted in the aftermath of this financial crisis. A Q&A with the film’s protagonists and one of its producers will follow the film screening.

“What happened to the Sungs seems horribly unfair, but this film is a silver lining. Everyone needs to see it.” Matt Zoller Seit (rogerebert.com)

Vera Sung serves on the board of directors for Abacus Federal Savings Bank and is its closing attorney. She worked for the Brooklyn DA’s office for two-and-a-half years after graduating from law school at Boston College. She has a B.A. from Wellesley College.

Heather Sung P’24 received her medical degree at the University of Connecticut and completed her residency in Internal Medicine at Dartmouth Hitchcock Medical Center in 1998. She began her career as a community health physician at Massachusetts General Hospital (MGH) where she was part of the 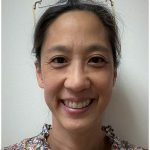 clinical faculty for the MGH Internal Medicine residency program and was an instructor of medicine at Harvard Medical School. Sung moved back to Connecticut when her first son, Connor Frederickson (Dickinson Class 2024) was born and continued her career as a hospitalist at Danbury Hospital. She became board certified in Hospice and Palliative Medicine in 2012, becoming the clinical leader of Palliative Care at Norwalk Hospital in 2016. Since 2018, as the founder of PalliMD, PLLC, Sung continues her clinical work in Palliative Care, and is involved in multiple teaching engagements in the community. 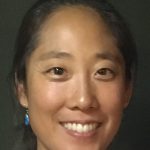 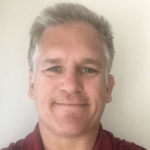 Nick Verbitsky P’24 has been producing for FRONTLINE since 2013, when he produced/directed To Catch a Trader, an investigative look at Wall Street insider trading, which garnered an Emmy nomination. Verbitsky subsequently produced Abacus: Small Enough to Jail (2017), which received an Oscar nomination for Best Documentary Feature, and has produced/co-produced films like Weinstein (2018) and Documenting Hate (2019), as well as Opioids, Inc.  Verbitsky has won two national Emmy Awards, as well as a DuPont-Columbia Silver Baton Award.