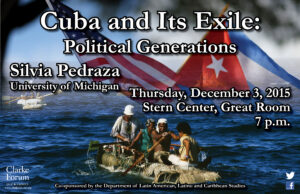 Cuba and its Exile: Political Generations 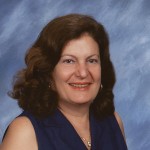 Silvia Pedraza is professor of sociology and American culture at the University of Michigan, Ann Arbor. She was born and raised in Cuba, from where she immigrated with her family at the age of 12. Her research interests include the sociology of immigration, race, and ethnicity in America, and the sociology of Cuba’s revolution and exodus. She places particular stress on comparative studies, both historical and contemporary. Her work seeks to understand the causes and consequences of immigration as a historical process that forms and transforms persons and nations; as well as social revolutions’ rupture with the past and attempt to create a different present.

In the American Sociological Association Dr. Pedraza was an elected member of its Council as well as its Nominations Committee. She was also elected chair of three cections: the International Migration Section; the Section on Latinos in the United States; and the Racial and Ethnic Minorities Section. From the Latino/a Sociology Section she received a major award: the Julian Samora Distinguished Career Award.

In the Social Science History Association, she has been part of its President’s Book Award Committee, and its Program Committee. She was an elected member of its Executive Committee.

At the University of Michigan, she was an elected member of the Curriculum Committee of the College of Literature, Science, and the Arts; the University’s Senate Assembly; and the Senate’s Executive Committee (SACUA), for which she was also elected vice-chair. Dr. Pedraza is also a two-time winner of the Excellence in Education Award. She is also a faculty fellow of the Honors Program.

Dr. Pedraza holds a B. A. from the University of Michigan and a Ph. D. in Sociology from the University of Chicago. She is the author of three books and numerous articles. A few of her publications include: Political Disaffection in Cuba’s Revolution and Exodus (Cambridge University Press, 2007); “Assimilation or Transnationalism: Conceptual Models of the Immigrant Experience,” in The Cultural Psychology of Immigrants, edited by Ram Mahalingham (Lawrence Earlbaum, 2006); and “Women and Migration: the Social Consequences of Gender,” Annual Review of Sociology (1991).