“Fracking” Our Food: A New Threat to Sustainable Farming 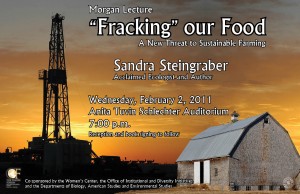 We are standing at a historic confluence, a place where two rivers meet: a stream of emerging knowledge about what the combustion of fossil fuels is doing to our planet is joining a stream of emerging knowledge about what synthetic chemicals derived from fossil fuels–such as pesticides and fertilizers–are doing to our bodies.” So writes biologist and author Sandra Steingraber in the second edition of her classic book, Living Downstream: An Ecologist’s Personal Investigation of Cancer and the Environment. In this lecture, Steingraber will explore the tangled relationship between petrochemicals and farming, with a special focus on natural gas, the feedstock for many agricultural products and whose extraction from shale bedrock of our nation is threatening the ecological conditions that support our food system.

The event is co-sponsored by the Women’s Center, the Office of Institutional and Diversity Initiatives, and the Departments of Biology, American Studies and Environmental Studies. 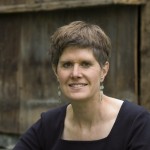 A world renowned ecologist, Sandra Steingraber is an expert on the links between cancer and the environment; reforming chemical policy and contamination without consent.

Ecologist, author, and cancer survivor, Sandra Steingraber, Ph.D. is an internationally recognized expert on the environmental links to cancer and human health. Steingraber’s highly acclaimed book, Living Downstream: An Ecologist’s Personal Investigation of Cancer and the Environment presents cancer as a human rights issue. Originally published in 1997, it was the first to bring together data on toxic releases with data from U.S. cancer registries and won praise from international media including The Washington Post, Publishers Weekly, The Lancet, and The London Times.

Released as a second edition in 2010, Living Downstream has been adapted for the screen by The People’s Picture Company of Toronto. This eloquent and cinematic documentary follows Steingraber during one pivotal year as she travels across North America, working to break the silence about cancer and its environmental links.

Continuing the investigation begun in Living Downstream, Steingraber’s book, Having Faith: An Ecologist’s Journey to Motherhood, explores the intimate ecology of motherhood. Both a memoir of her own pregnancy and an investigation of fetal toxicology, Having Faith reveals the extent to which environmental hazards now threaten each stage of infant development. In the eyes of an ecologist, the mother’s body is the first environment for life. The Library Journal selected Having Faith as a best book of 2001, and it was featured in a PBS documentary by Bill Moyers.

Called “a poet with a knife” by Sojourner magazine, Steingraber has received many honors for her work as a science writer. She was named a Ms. Magazine Woman of the Year and later received the Jenifer Altman Foundation’s first annual Altman Award for “the inspiring and poetic use of science to elucidate the causes of cancer.” The Sierra Club has heralded Steingraber as “the new Rachel Carson,” and Carson’s own alma mater, Chatham College, selected Steingraber to receive its biennial Rachel Carson Leadership Award. In 2006, Steingraber received a Hero Award from the Breast Cancer Fund and, in 2009, the Environmental Health Champion Award from Physicians for Social Responsibility, Los Angeles.

An enthusiastic and sought-after public speaker, Steingraber has keynoted conferences on human health and the environment throughout the United States and Canada and has been invited to lecture at many universities, medical schools, and hospitals—including Harvard, Yale, Cornell, Columbia, and the Woods Hole Research Center. She is recognized for her ability to serve as a two-way translator between scientists and activists. She has testified in the European Parliament, before the President’s Cancer Panel, and has participated in briefings to Congress and before United Nations delegates in Geneva, Switzerland. Interviews with Steingraber have appeared in The Chicago Tribune, USA Today, The Cleveland Plain Dealer, on National Public Radio, “The Today Show,” and “Good Morning America.”

A columnist for Orion magazine, Sandra Steingraber is currently a scholar in residence in Ithaca College in Ithaca, New York. She is married to the artist Jeff de Castro, and they live in a 1000-square-foot house with a push mower, a clothesline, a vegetable garden, and two beloved children.

The Morgan Lectureship
The Morgan Lectureship was endowed by the board of trustees in 1992, in grateful appreciation for the distinguished service of James Henry Morgan of the Class of 1878, professor of Greek, dean, and president of the College. The lectureship brings to campus a scholar in residence to meet informally with individuals and class groups, and to deliver the Morgan Lecture on topics in the social sciences and humanities. Recent scholars have been Jorge Luis Borges, Francis Fukuyama, Michael Ignatieff, Samantha Power and Art Spiegelman.