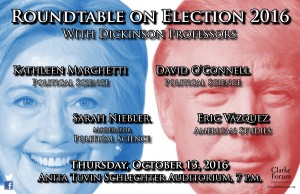 A panel of Dickinson professors will discuss the 2016 presidential election from an academic, nonpartisan perspective, covering topics such as gender and race, the importance (or not) of campaigns, immigration, voting behavior, and presidential primaries.

This event is sponsored by the Clarke Forum for Contemporary Issues and is part of our stream on the 2016 Presidential Election.

Kathleen Marchetti is an assistant professor of polit 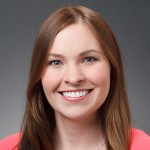 ical science at Dickinson College. She holds dual degrees in political science and women’s studies from Penn State University and Gettysburg College. Her research and teaching interests focus on gender and politics, interest groups, intersectionality, state politics, and political methodology. Her research on these topics has been published in State and Local Government Review, Interest Groups & Advocacy; Gender, Place & Culture; Politics, Groups and Identities, the Washington Post‘s Monkey Cage, and the London School of Economics’ American Politics and Policy blog. At Dickinson she offers courses on identity politics (e.g., gender and politics, race and politics), American government, and interest groups and advocacy.

Sarah Niebler earned her Ph.D. in political science from the University of Wisc 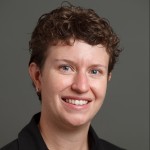 onsin-Madison, where her dissertation examined the U.S. presidential nominating process and she worked for the Wisconsin Advertising Project watching and analyzing televised campaign commercials. Her research on campaigns and elections, political behavior, and public opinion has been published in the American Journal of Political Science; American Politics Research; Legislative Studies Quarterly; and Political Communication.

At Dickinson, Sarah teaches classes in American politics that relate to how everyday citizens interact with the political process. She is passionate about having students engage in hands-on research.  In her Mass Media course, students create their own news reports and campaign ads. In her Public Opinion and Survey Research class, students design, implement, and analyze public opinion surveys related to issues of interest to the Dickinson community. In election years, she works with students to field exit poll of Cumberland County, Pennsylvania residents, the results of which she makes public to interested parties.

Sarah arrived at Dickinson College in 2013 after spending a year as a postdoctoral fellow in the Center for the Study of Democratic Institutions at Vanderbilt University.  She is originally from Gettysburg, Pennsylvania and holds a B.A. from Muhlenberg College and an M.A. from Lehigh University. 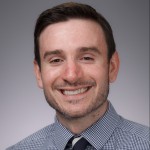 David O’Connell is an assistant professor of political science at Dickinson College.  His research interests include the presidency and religion and politics.  Professor O’Connell’s research has been published in Presidential Studies Quarterly, and his first book, God Wills It: Presidents and the Political Use of Religion, is being re-released in paperback this fall.  Professor O’Connell is also a frequent media commentator on American politics, having appeared on C-SPAN, ABC27, FOX43, and WITF, and he has been interviewed by print outlets ranging from CNN to The Christian Science Monitor to the Pittsburgh Post-Gazette.  Professor O’Connell received his M.A., M.Phil., and Ph.D. in political science from Columbia University, and holds a B.A. in political science and economics from the University of Pennsylvania. 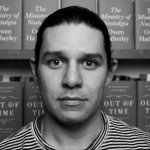 Eric Vázquez is a visiting assistant professor in American studies at Dickinson College. His research interests include Latina/o migration, U.S. cultural and military engagements in Latin America, and cultural/political theory. His developing book project, Coercive Attachments: U.S. Imaginaries of the State in Central America, explores how U.S. narratives about insurgency in 1980s Central America prefigure Americans’ anxieties about the historical purpose, function, and viability of government in the post-Cold War world. Professor Vázquez received Ph.D. from Carnegie Mellon University in Cultural Studies and he holds a B.A. in English from Kenyon College.