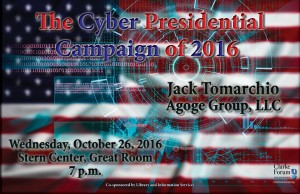 The Cyber Presidential Campaign of 2016

In this talk, Tomarchio will analyze how cyber breach and cyber security has influenced our national presidential election. 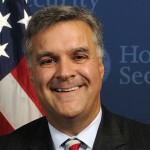 Jack Thomas Tomarchio is a principal with the Agoge Group, LLC, an international strategic advisory firm based in Wayne, Pennsylvania. He is also executive vice president for Cyber Strategy with Xero Day Cyber, a cyber solutions firm based in Ft. Lauderdale, Florida.  He concentrates on developing business processes for technology companies, many of them in the defense, homeland security, cyber security and intelligence fields. He is also an active entrepreneur and has been involved in numerous early and mezzanine stage companies as an investor and a principal. In 2005 Tomarchio was appointed by President George W. Bush to be the first principal deputy assistant secretary of Homeland Security for Intelligence and Analysis. In 2007 he became principal deputy undersecretary for Intelligence and Analysis Operations. In his work at the Department of Homeland Security he was the primary senior official in charge of the intelligence directorate’s partnership with state and local governments to build a domestic intelligence sharing network. He also worked closely with other components of the federal intelligence community. He left the department in late 2008 to return to the private sector.

Prior to joining the Department of Homeland Security, Mr. Tomarchio was a partner at the national law firm of Buchanan Ingersoll & Rooney, P.C. where he was co-chair of the firm’s government relations department and national security law group. He returned to Buchanan in 2013 where he served as co-chair of the firm’s Cyber Security Practice Group. Before joining Buchanan, Mr. Tomarchio was a founding partner of Hill Solutions, LLC and Homeland Solutions, LLC. Hill Solutions was a government affairs and lobbying firm. Homeland Solutions specialized in consulting state and local governments on homeland security and intelligence issues and was instrumental in helping several states and cities establish intelligence fusion centers. From 1993 until 2005 he also served as general counsel to Aloe Investment Corporation, a venture capital firm.

He began his career as a judge advocate and paratrooper in the United States Army’s 82d Airborne Division, serving in the Grenada invasion and later as counsel to the Multi National Force and Observers (MFO) in the Sinai, Arab Republic of Egypt. He also served as detailed counsel to an Army Special Missions Unit at Fort Bragg, North Carolina. After leaving the Army, Mr. Tomarchio became a litigator for two national law firms in Philadelphia. He was recalled to active duty for the Persian Gulf War, deploying to Saudi Arabia and Kuwait. Returning to the United States he was detailed to the Joint  Chiefs of Staff where he was assigned by the United Nations Directorate of Peace-keeping Operations (UN/PKO) to draft the standing Rules of Engagement for UN Peacekeepers operating under Chapters VI and VII of the UN Charter. Subsequent to that assignment, he was selected to command the 411th Civil Affairs Battalion. Following a successful command tour he was chosen to command the 153rd Legal Support Organization. Staff assignments included senior legal advisor, US Special Operations Command, Hurlburt Field, Florida; staff judge advocate for the Military Intelligence Readiness Command, Fort Belvoir, Virginia and a tour as special assistant to the assistant secretary of defense for Special Operations and Low Intensity Conflict in the Pentagon. He retired from the United States Army in 2010 with the permanent rank of colonel.

Long active in Republican politics in Pennsylvania, he is a former member of the Lower Moreland Township Planning Commission and the Newtown Township Zoning Appeals Board, where he served as chairman. In 2008 he was a member of Mitt Romney’s national security team where he developed and co-authored the candidate’s position on counter terrorism and homeland security. He is a frequent television commentator, writer and speaker on national security issues and has provided on air commentary for ABC, NBC, BBC, FOX News, Al Jazeera America, MeTV, Canadian Television (CTV), i24News (Israel) and numerous radio stations around the country. Tomarchio has testified before both houses of Congress on homeland security and intelligence matters.

Mr. Tomarchio has served on several corporate boards as an outside independent director and has extensive experience in board operations and financial and operational oversight of senior management.

He was an adjunct professor at the Fels Center of Government of the University of Pennsylvania from 2001-2005 and is currently an adjunct lecturer at the United States Naval Post Graduate School in Monterey, California. He was a senior fellow at the George Washington University Homeland Security Policy Institute (2005-2008) and currently serves as a senior fellow at the Foreign Policy Research Institute. In 2016 he was asked by US Cyber Command to serve on a commission at the United States Army War College in Carlisle, Pennsylvania to  recommend Department of Defense responses to hostile cyber attacks. Mr. Tomarchio is a member of the Homeland Security Advisory Council at the Pennsylvania State University and on the Board of Advisors of the Drexel University Cyber Security Institute and the Security Industry Association’s Cyber Security Advisory Board. He currently holds active federal security clearances.