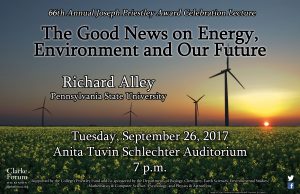 The Good News on Energy, Environment and Our Future

Humans have burned trees, whales, and now fossil fuels far faster than they grew back, enjoying the energy but suffering the environmental impacts and then shortages. Now, we are the first generation that can build a sustainable energy system, improving the economy, employment, environment, ethics, and national security.

The Joseph Priestley Award recipient is chosen by a different science department each year. The Department of Earth Sciences has selected this year’s recipient. The event is supported by the College’s Priestley Fund and is sponsored by the Clarke Forum for Contemporary Issues and co-sponsored by the departments of biology, chemistry, earth sciences, environmental studies, mathematics & computer science, psychology, and physics & astronomy. 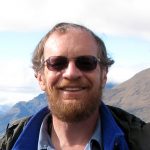 Richard Alley (Ph.D. 1987, Geology, Wisconsin) is Evan Pugh University Professor of Geosciences at Penn State.  He studies the great ice sheets to help predict future changes in climate and sea level, and has conducted three field seasons in Antarctica, eight in Greenland, and three in Alaska.  He has been honored for research (including election to the U.S. National Academy of Sciences and Foreign Membership in the Royal Society), teaching, and service.  Alley participated in the U.N. Intergovernmental Panel on Climate Change (co-recipient of the 2007 Nobel Peace Prize), and has provided requested advice to numerous government officials in multiple administrations including a U.S. vice president, the President’s science advisor, and committees and individual members of the U.S. Senate and House of Representatives.  He has authored or coauthored over 290 refereed scientific papers.  He was presenter for the PBS TV miniseries on climate and energy Earth: The Operators’ Manual, and author of the book.  His popular account of climate change and ice cores, The Two-Mile Time Machine, was Phi Beta Kappa’s science book of the year.  Alley is happily married with two grown daughters, two stay-at-home cats, a bicycle, and a pair of soccer cleats.